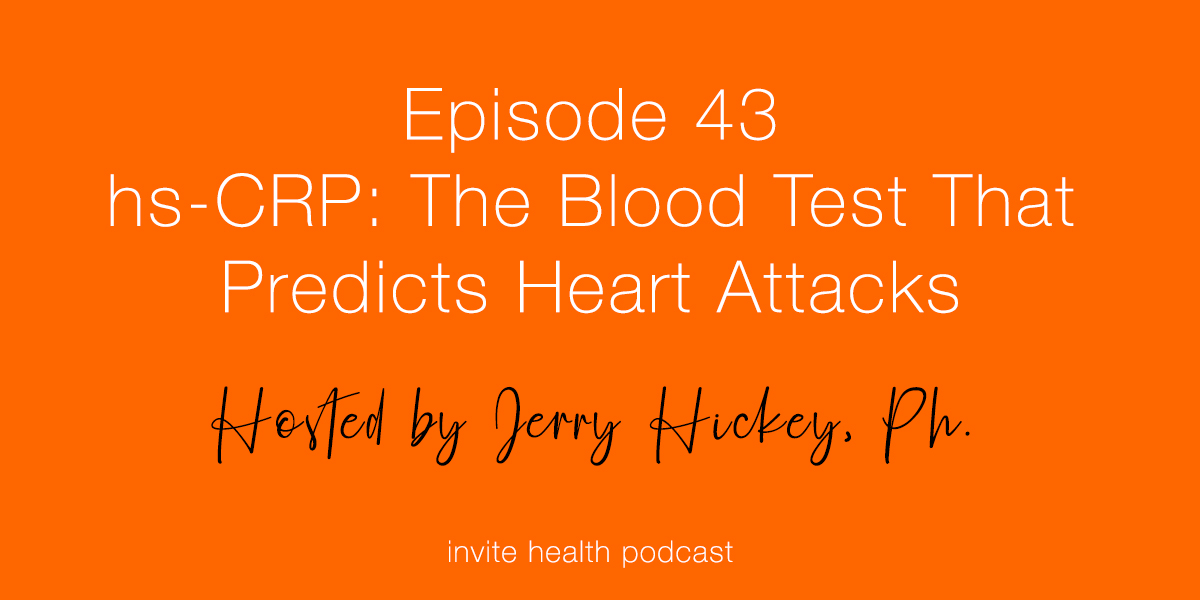 The hs-CRP test is not a well known blood test, but it should be. It can help predict your future risk of a heart attack and heart disease. This is a test that should be added to your regular yearly check up. Hs-CRP is also called Cardiac-CRP and it is a proxy for inflammation.

Why is this such a useful test?

This test is useful because, for those who already have heart disease, it can show how much damage has been caused to the heart and the blood vessel walls or whether you are at risk for having another heart attack. For others, it can be predictive to whether your arteries will have a build up of plaque or clogged arteries and the consequences – stroke and heart attack.

A different, more common test, CRP – C-Reactive Protein. This is something released from an inflamed liver. This test allows the doctor to generally see how much inflammation you are experiencing in your body. To study inflammation in the heart, the hs-CRP is the best.

Hs-CRP stands for High Sensitivity C-Reactive Protein. It is more precise than a regular CRP test. In terms of results, a normal test result would be one (1). If your CRP is two (2) or more, it indicates there is inflammation, especially in the heart and blood vessel walls. If it is over three (3), your blood vessel walls are thicker and inflamed. This can lead to a stroke or heart attack. I strongly recommend the hs-CRP test.

Note: women on hormone replacement therapy have been shown to have elevated hs-CRP levels.

One study journal of the American College of Nutrition – this is a state-of-the-art-study – of 90 patients. The participants were put on Krill Oil and after seven days, it reduced their level of hs-CRP by 19.3%. After one month, levels were lowered by 30.9%.

A separate study from the Archives of Medical Science, University of Bologna – another state-of-the-art study – was performed on those with high triglycerides. This a another kind of greasy fat in your blood that can clog arteries and lead to stroke and heart attack. Researchers gave participants Krill oil or prescription Fish oils and found the Krill worked better for lowering inflammation. The Fish oils seemed to work better to lower triglycerides. Krill oil was shown to improve good cholesterol and worked better overall in the study.

Clinical Studies on hs-CRP and Resveratrol

Resveratrol is another nutrient that has been studied for the support of heart health. This is an antioxidant that can be found in red wine, as it is found in red grapes. Putting that in a capsule can be complicated but researchers at Fizer showed InVite® Health how to remove specific, powerful components of Resveratrol and include it safely and effectively in a capsule (not a liquid or a powder) – without oxygen and light in the room to impact its efficiency.

Published in the journal Current Medical Chemistry from researchers in Italy, studied Resveratrol in smokers. This was a Gold Standard study. Patients used Resveratrol for one month and placebo and then switched. The researchers concluded that within the first month, Resveratrol lowered hs-CRP (inflammation) by 53% within the first month in smokers. Smokers usually have a higher risk of inflammation due to the smoke they inhale, that directly impacts the heart and other muscles in the body. This is something we need to be aware of and is a very important study.

Another Test To Predict Your Risk

Heart disease is the leading cause of death in the United States. Having a genetic variant may increase your risk of dying from a heart attack or stroke. InVite® Health now offers genetic testing! The Cardiac Health Test can help to identify eight prominent genes related to heart disease. These variants may lead to increased risk of high blood pressure, blood clots, vascular inflammation, stroke or heart attack.

Ideal candidates for this panel are individuals with the following symptoms or conditions;

Genes associated with this panel include;