Why Mosquitoes Like You and Natural Repellents – Invite Health Podcast, Episode 109 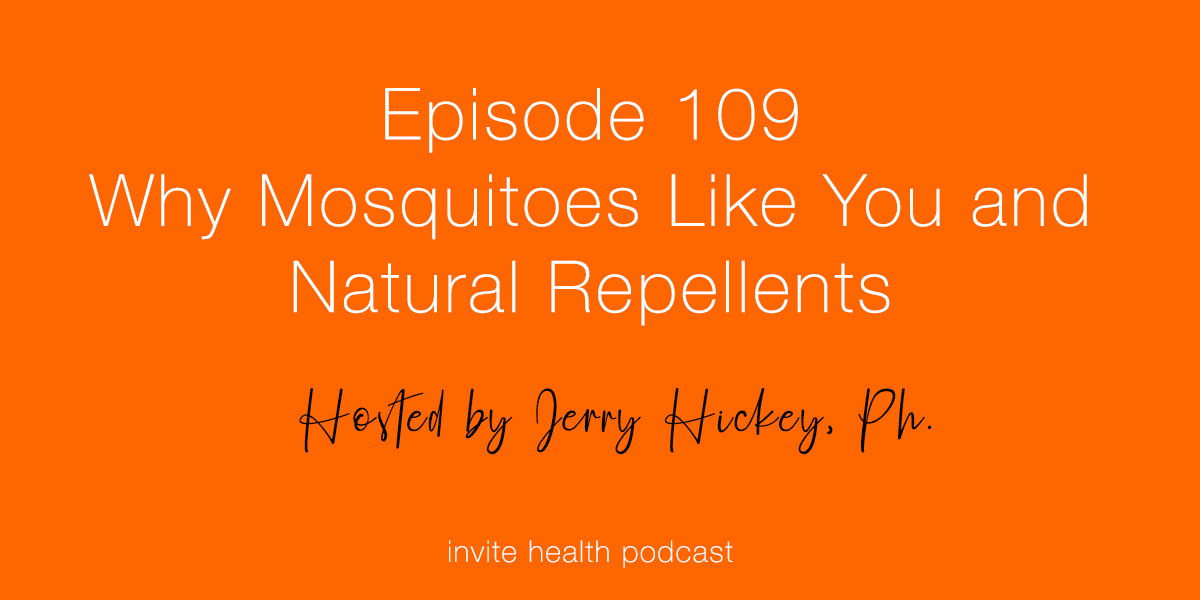 Years ago I heard a very interesting interview. It was a young women that belonged to the Jain religion, or Jainism. Jaines are committed to nonviolence. When walking, Jaines carry a whisk broom and use it to sweep in front of themselves gently in order to not step on an innocent animal or insect. For this young lady in the interview, if she had a mosquito in her bedroom it would have terrible power because she could not swat it away and had to let it survive. On the other end of the mosquito spectrum, when my brother came home from Vietnam, he had a terrible case of Malaria. My brother was shaking and shivering and had to take medication. Malaria is the the most well known mosquito-born disease. But not all mosquitoes spread disease. But of over 200 types of mosquitoes in the United States, only about 12 of them spread germs and disease. Today we will discuss the reasons why mosquitoes may be so attracted to you according to research and what you can do to dissuade them.

Experts may have unraveled why mosquitoes bite some of us more often than others. It seems that these insects do have preferences, according to Dr. Jerry Butler, a professor at the University of Florida. He reports that one in ten people are highly attractive to mosquitoes. Males do not bite us and females need human blood to develop fertile eggs. However, not just anyone’s blood will do. So why do mosquitoes like you so much?

Researchers have still not point to an exact reason. But there is a tremendous amount of research being conducted on this. Joe Common, PhD, and Technical Advisor to the American Mosquito Control Association reports that there is something about our own genes that call to mosquitoes. Research has also identified certain factors in our body chemistry that can also have this impact. People with high concentrations of steroids or high cholesterol on their skin has been shown to attract mosquitoes. If this is true, you will want to turn to natural alternatives to help lower your cholesterol. Sterols are a fat from vegetables that has been shown to block the absorption of cholesterol. Studies show that if you take it before meals, sterols may help to lower your cholesterol levels.

Learn more about Sterols and Healthy Cholesterol by clicking here.

Mosquitoes are also targeting individuals that produce excess amounts of uric acid. Uric acid can trigger a mosquitoes sense of smell. A simple blood test can tell you your uric acid level and the good news is that it is not hard to reduce. To do this, you can cut back on sugary foods and drinks like soda, meat, shellfish, alcohol. At low levels, uric acid works as an antioxidant but at high levels, it can be dangerous. If you have other risk factors for heart disease like obesity, diabetes or high blood pressure, elevated uric acid levels can become extremely dangerous. You want your uric acid level below six, but above five.

Mosquitoes can smell all of these factors from a longer distance away than a football field. This does not boad well for obese people, as they emit a larger level of carbon dioxide. Overall, obesity is associated with about a 20% more greater emission of green house gases, such as carbon dioxide, methane, and nitric oxide. This is according to a study published online in the journal Obesity. Phase 2 is a starch blocker that helps to block the amount of sugar you absorb from carbohydrates. There are many human clinical trials that show evidence that this supplement can benefit overweight or obese individuals. The point system from Weight Watchers may also be a good option. Being active and taking walks is always a great option.

Over The Counter Options

There are plenty of mosquito repellents lining the shelves of drug stores, especially as the summer is quickly approaching. Many repellents use synthetic chemicals, like deet, whose full name is N,N-diethyl-meta-toluamide. This is the most widely used insect repellent in the United States. Many scientist believe that it is the “gold standard” of repellents but I personally do not recommend it. This may be great for areas that have high incident levels of yellow fever, but for those who are at home just trying not to get bit as they grill, I would not recommend it. Deet was created by chemists for the US Army in the 1940s. In 1998, the environmental protection agency conducted an assessment of deet that turned up 46 use-related seizure cases and four deet-related deaths. In a different analysis, researchers looked at more than 9,000 deet-related calls to poison control centers between 1985 and 1989. They found that for those people referred to health centers, 80% were discharged after an examination. A second analysis of over 20,000 calls made to poison control centers between 1993 and 1997 found similar results.

Scientists also say that deet breaks down into other molecules very quickly, including the rain, wind and sun. Here’s the problem. When chemicals get into your system, they are modified and bonded to other chemicals. Together, they can become much more toxic and dangerous than their original form, which is why only paying attention to single chemicals does not provide the bigger picture.