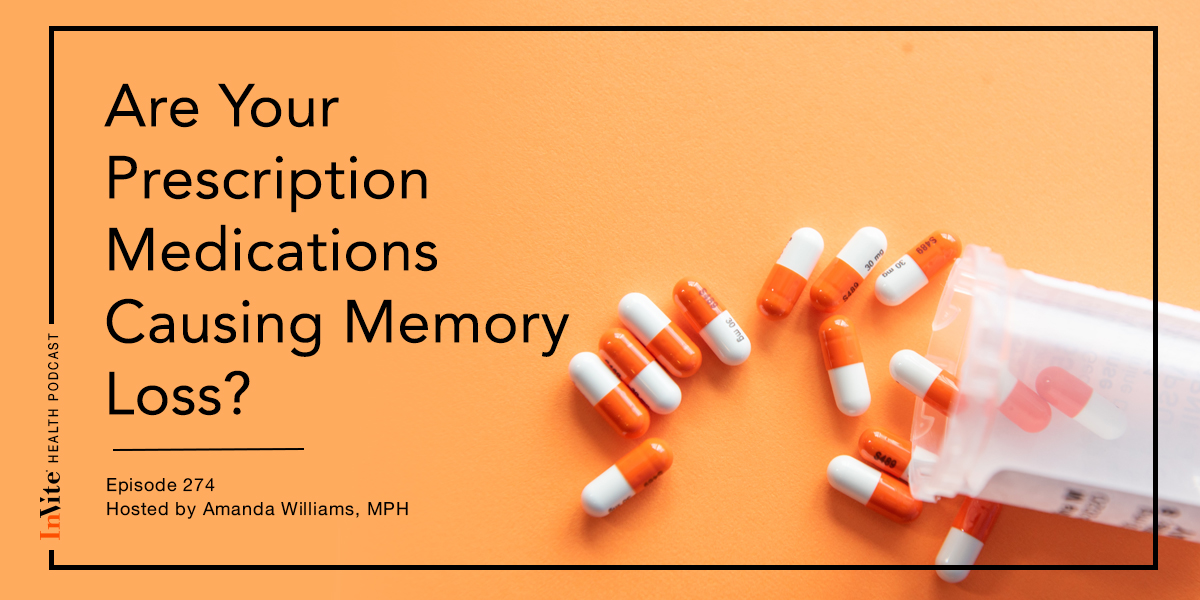 There are certain classes of drugs that people are commonly prescribed that can actually affect, in a very negative way, someone’s cognition or memory over time. There are so many medications out there that can affect someone’s cognition and many times, people don’t even correlate it. First and foremost, they are usually completely unaware that’s even a potential side effect and oftentimes, their doctor is unaware of that, too. I want to talk about the different types of drugs or classes of drugs that we know can lead to a higher rate of cognitive decline and can even lead to dementia. To me, this is a very important topic because so many people are on prescribed medications. When you look at some of the more commonly prescribed medications in this country, they are often linked to declining cognition.†

One of the most commonly prescribed medications that people are put on for an overactive bladder or for incontinence is oxybutynin, which also goes by the brand name of ditropan. This is an anticholinergic medication. When we look at things that are anticholinergic, what this actually means is that it’s blocking your cholinergic pathway. This is important because when we look at our cognition, we know that choline plays a huge part in this. Even when you look at drugs that are prescribed for Alzheimer’s disease, those are actually trying to enhance the cholinergic effect. If you look at a drug that actually blocks that, it would make sense that if we’re blocking the choline, then we’re blocking the ability for the brain to have that very important amino acid that is then transferred into a fatty acid.†

A report out of the University of California San Diego School of Medicine talks about different classes of drugs and how they are actually linked to an increased risk of Alzheimer’s disease. They published this in the Journal of Neurology. One of the main classes of drugs that they focused on was the anticholinergic drugs, which are utilized for dozens of different conditions, including bladder health, Parkinson’s disease, allergies, high blood pressure and incontinence. What the researchers recognized was that these anticholinergic drugs were depleting the brain’s storage of acetylcholine. Acetylcholine is a primary neurotransmitter that is required for our ability to think and have memory. If we’re blocking that, then that’s a major issue. Oftentimes, the people who are prescribed these anticholinergic medications are already up there in age and the metabolism of those anticholinergic drugs is certainly much different than it would be in someone in their 20s or 30s. The researchers were really delving into this and examining that brain and cognitive effect of different anticholinergic medications.†

You certainly don’t want people to be on a medication that is creating more harm than it is good. What medications, other than the anticholinergic drugs, can have this impact on the body?

Harvard actually looked into this. They looked at 3500 men and women over the age of 65 and studied what medications they were on for the 10 years prior to the start of the study. Then, the researchers tracked the subjects’ health for the next seven years. During that time, out of the 3500 men and women, 800 of them developed dementia. What they were really focusing in on was the different types of medication that these people were on. They found that those who were prescribed and using anticholinergic drugs were more likely to develop dementia than those who did not. What was really quite alarming in this study was that the dementia risk increased along with the cumulative dose, meaning that if someone was taking an anticholinergic drug for the equivalent of roughly three years, they had a 54% increased risk for developing dementia. This is concerning when you think about how many people have issues with blood pressure or bladder health and are put on these medications technically for the rest of their lives and yet, every year, it’s wreaking havoc on their memory. Their family may play this off as part of aging without realizing it’s coming from the medication.†

Other medications that have been identified as having a link with memory loss include diphenhydramine (benadryl), ataraks (hydroxyzine) and chlorpheniramine (over-the-counter cold medicine).†

For more research on the relationship between prescription medications and memory loss, tune into the full podcast episode.