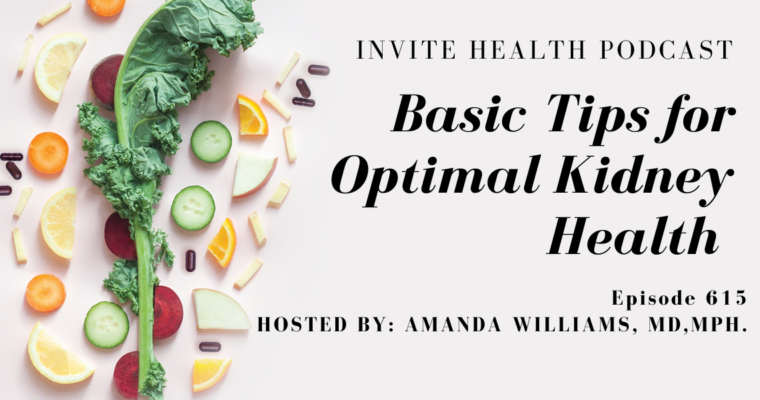 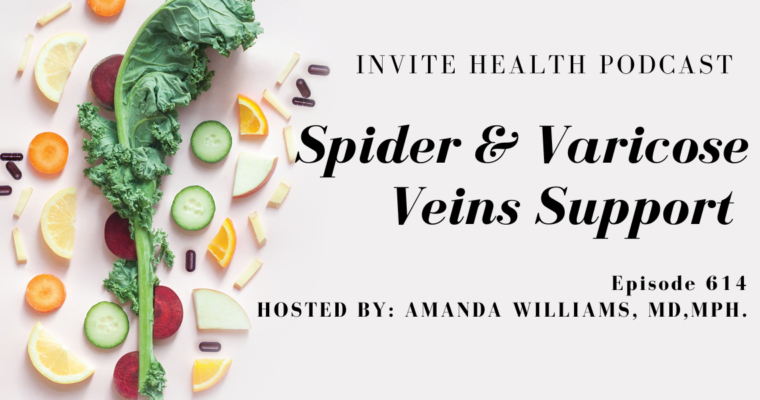 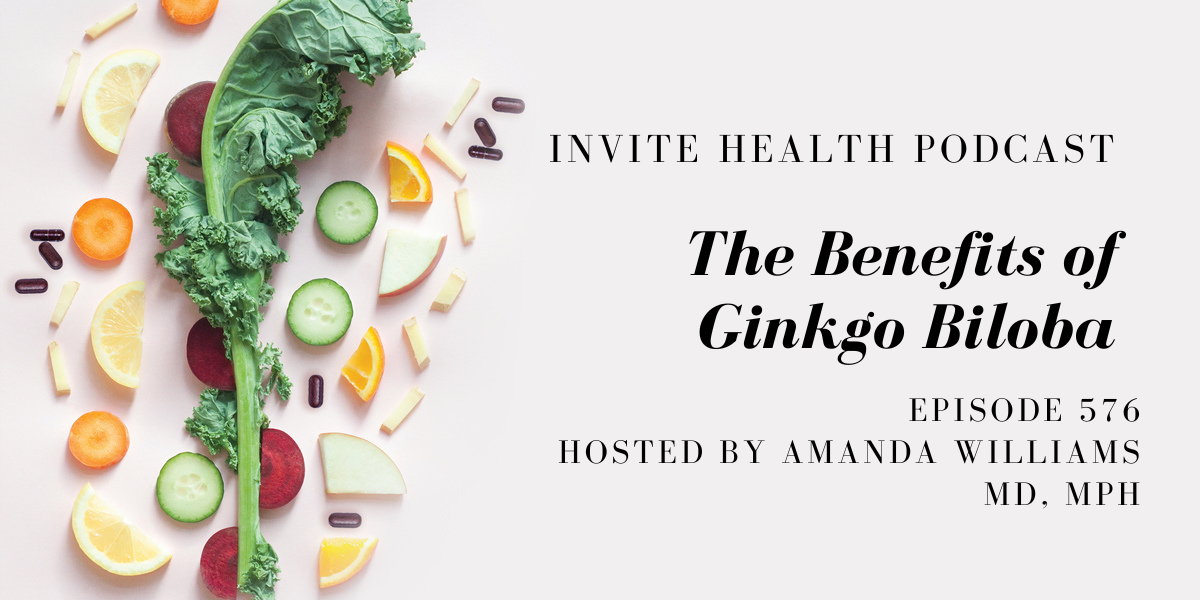 InViteⓇ Health Podcast Intro: Welcome to the InViteⓇ Health Podcast, where our degreed healthcare professionals are excited to offer you the most important health and wellness information you need to make informed choices about your health. You can learn more about the products discussed in each of these episodes and all that InViteⓇ Health has to offer at www.invitehealth.com/podcast. First time customers can use promo code PODCAST at checkout for an additional 15% off your first purchase. Let’s get started!†

Amanda Williams MD, MPH: [00:00:40] Did you know that one of the oldest trees in the world also provides us one of the most powerful medicinal benefits, and that is ginkgo biloba? I want to talk about Gingko today and why Gingko has been touted as being the one of the most supportive nutrients that someone can include in for brain health as well as cardiovascular health. So I’m going to get into some of the science on ginkgo biloba today.† [00:01:08]

[00:01:08] I am Dr. Amanda Williams, scientific director here at InVite Health. And ginkgo has been shown through, you know, ancient times all the way through to today, to modern day medicine, just how powerful it is as an antioxidant and has these really unique properties to it in terms of vasoactive. Meaning it’s incredibly supportive for our vascular system, which is key for our cognitive function, because if we can have good, proper blood flow to the brain, then this will help with the energy production and the oxygenation within the brain which can definitely help us when it comes to memory and mood.† [00:01:50]

[00:01:51] And this is why the scientific world has really kind of grabbed a hold of looking at all of the many ways to which ginkgo biloba really potentiates these powerful health benefits for us as humans when we’re taking it as a supplement. And we have ginkgo biloba in our Cognition Hx formulation as well as in the Mind Synergy. So as you can see, it’s in those two formulations that are really geared towards supporting brain health. We also have the ginkgo biloba in the Men’s Edge because we also know that it’s very beneficial. When it comes to vasodilation and allowing for good, proper blood flow, which is key for men who have concerns with erectile dysfunction, for example.† [00:02:35]

[00:02:36] But across the many years of research, they have been able to kind of zero in on how ginkgo biloba has been used in a variety of different circulatory disorders for respiratory issues such as asthma, for ringing in the ears or tinnitus in balance, issues such as vertigo, for example. As well as a whole slew of different cognitive issues, including things such as depression and anxiety, along with helping with focus and attention. So we know that Gingko itself really does have this powerful means to really enhance the way that our body functions. And this is why the the leaf extract that we utilize in our different formulations that I mentioned, the Cognition Hx, the Mind Synergy as well as the Men’s Edge, really help to allow the body to have better performance.† [00:03:38]

[00:03:40] Whether we’re looking at sexual performance with the Men’s Edge formulation or if we’re looking at cognitive and cardiovascular performance with the Cognition Hx and the Mind Synergy. So extensively research, I would say that ginkgo biloba is probably one of the most widely studied extracts out there. And the mechanism of action of how it is that ginkgo biloba is actually working is really very interesting. We know that not only is it helping when it comes to the structural integrity of the vessels themselves, but it’s also through its action as a powerful antioxidant in the powerful flavonoids that are contained in this. The flavonoids, the glycosides that are contained in the ginkgo biloba, are very potent antioxidants. And this is another reason as to why it’s so beneficial when it comes to brain health, because when we think about the neurotransmitters, for example, which help to regulate our mood, our sense of calm, our sense of happy. We can see how the glycosides in the ginkgo biloba can really be beneficial to the proper action of the release of those neurotransmitters.† [00:04:57]

[00:04:59] So through many of the different studies throughout the years, they have predominantly kind of focused in on how ginkgo biloba can help to improve cognition. There was a study that was done over 20 years ago that showed that when they gave ginkgo biloba to folks who were dealing with mental fatigue and low levels of depression and after giving them ginkgo biloba daily for one month, they had this significant improvement. Well, right around that time, they had done another study that was very similar in nature. But they took people who were actually very healthy and had no underlying health issues. And they, too, found that when they gave them ginkgo biloba, they had this overall sense of improvement in terms of quality of life.† [00:05:48]

[00:05:48] So we know that the mood impact that ginkgo biloba can yield us is very, very powerful. On top of the fact that where you know, that it can help to enhance our circulation. And this isn’t just circulation going to the brain or for the heart. We can even look at this in the setting of eye health. And they have studied the use of ginkgo biloba, even in diabetic retinopathy. So when I am asked about gingko by folks, it’s usually like, well, is this the right formulation for me? Because maybe I don’t really have a concern about memory or maybe I don’t have cardiovascular concerns. But I always kind of default back to this is one of the most widely studied and clinically researched nutrients out there. And it’s storied history from thousands of years ago all the way to today. We can see how it helps to promote our overall systemic health, which is why I feel it is a really wonderful addition to anyone’s, you know, daily supplementation routine.† [00:06:55]

[00:06:56] Even if it comes down to G.I. Support, the powerful flavonoids once again contained within the ginkgo biloba have been shown to be very effective at enhancing the way that our intestines are responding and reacting to periods of stress. And it actually helps to even stabilize our other endogenous antioxidants, things like superoxide dismutase, for example. We have seen studies that have even broadened out. To look at how ginkgo biloba can be very beneficial when it comes to targeting inflammation.† [00:07:28]

[00:07:29] So even in the setting of arthritis, those who used ginkgo biloba were actually seeing increased improvement in their symptoms just through the addition of ginkgo. So maybe they’re using the ginkgo for brain health but they started to see the benefit when it came to their joint health. So as an anti-aging supplement, I definitely categorize ginkgo into that same kind of wing that we put things like resveratrol into. Because of the multiple functions to which Ginkos actions are actually yielding.† [00:08:05]

[00:08:06] And there was a really interesting journal kind of review on ginkgo biloba that was published in the evidence based, Complementary and Alternative Medicine Journal back in 2013. Kind of going through and zeroing in on all of the different ways to which ginkgo biloba has been shown to be highly effective across different randomized Placebo Controlled trials for things such as ADHD, autism, for anxiety disorders, looking at other mood disorders such as depression, clearly in the setting of, you know, mild cognitive impairment and dementia. But then also seeing how effective it can be when it comes to regulation of inflammation in the body. It really is a wonderful, wonderful nutrient to consider in part of your daily routine. So check out the Cognition Hx Formulation, the Mind Synergy or the Men’s Edge if you want to get that wonderful exposure to Ginkgo biloba.† [00:09:08]

[00:09:09] And I want to thank you so much for tuning in to the InVite Health Podcast. Remember, you can find all of our episodes for free wherever you listen to podcasts or by visiting invitehealth.com/podcast. Now do make sure that you subscribe and you leave us a review. You can follow us on Facebook, Twitter and Instagram at InVite Health. And we will see you next time for another episode of the InVite Health podcast.† [00:09:09]