The Basics Of Digestive Health, Part 2 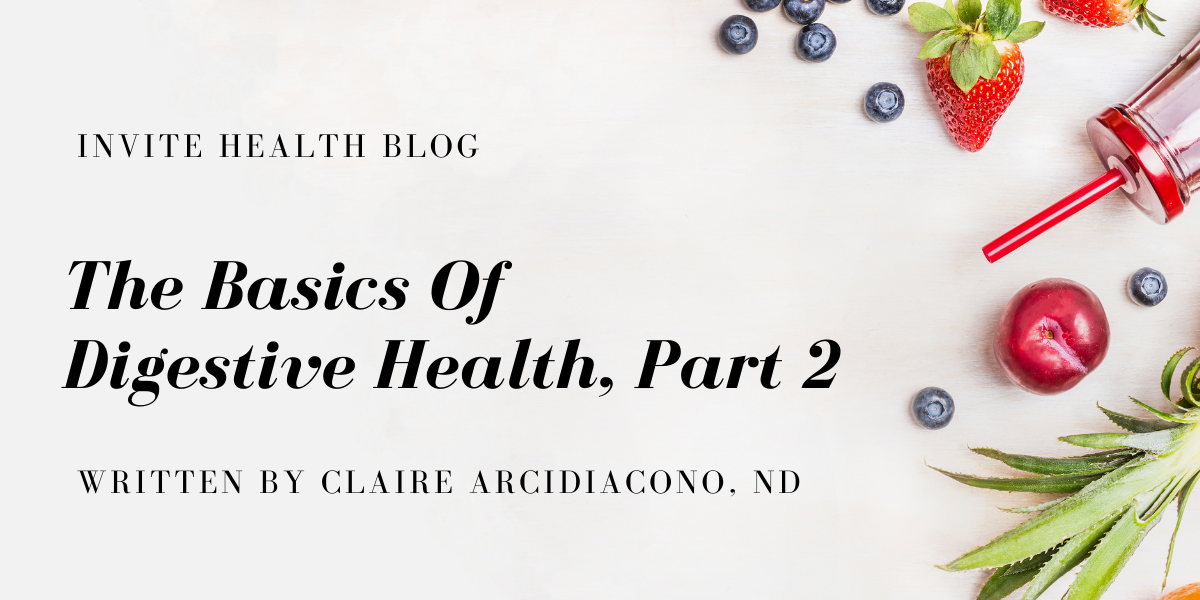 For further questions or concerns email me at carcidiacono@invitehealth.com

Last week we had an introduction to the digestive system. To recap, the digestive system is made up of the gastrointestinal tract and several organs that work alongside the tract. They interact through enzymes produced by the organs. These organs include the pancreas, liver and gallbladder. The digestive system has its own immune system and its own nervous system. Now that we’re all caught up, let’s dive a little deeper.†

Connected to the pancreatic duct is the bile duct. (1) Bile from the liver helps the Small Intestines to process and digest fat as well as absorb our fat soluble vitamins. Picture a large fat molecule and a tiny enzyme, it can be intimidating for the tiny enzyme to break it down. Bile comes along, breaks it up into tiny pieces that are easier for enzymes to manage. But wait – is bile from the liver? What about the gallbladder? The liver produces bile and sends it into the duct network known as the bile duct. In the bile duct, it goes to the gallbladder which stores and concentrates bile. Later, it’s released into the duodenum via the duct network. The connection between the bile duct and pancreatic duct is important in the case if there are stones in the gall bladder, they can travel the duct network and get stuck. For example, if they travel to the pancreatic duct, the pancreatic enzymes can start to build up leading to damage of the pancreas. This is supposed to be just simple anatomy, so we can get more into gall stones later. Basically, the pancreatic duct and the bile duct end up joining together to form a funnel called ampulla of vater which funnels the enzymes and bile into the intestines. The pancreatic duct is what the network is called for the pancreas and the bile duct is the pathway for bile. The liver in addition to producing bile also makes all of the “chemicals” or hormones our body uses to do things. The liver has many other jobs such as detox. To summarize, the small intestines absorb the nutrients and the liver uses the nutrients to build. †(2)

Now, how does the GI track come into play here?

It travels by a series of muscle contractions known as peristalsis. As you saw in the last blog, the GI tract is what is referred to as a closed system. Food for example stay in the GI tract and doesn’t just float around the body. Bacteria are also supposed to stay in the colon. We’ll go into more depth about leaky gut later on in this series.†

This is a general overview/introduction to the interesting and important topic of digestive health. You can also expect me to go more in depth about the digestive system having its own immune system in a future article. I’ll be talking about tests for gut health next week. To give you a little tease, let’s just say 70% of our immune system is in our gut!† (3)