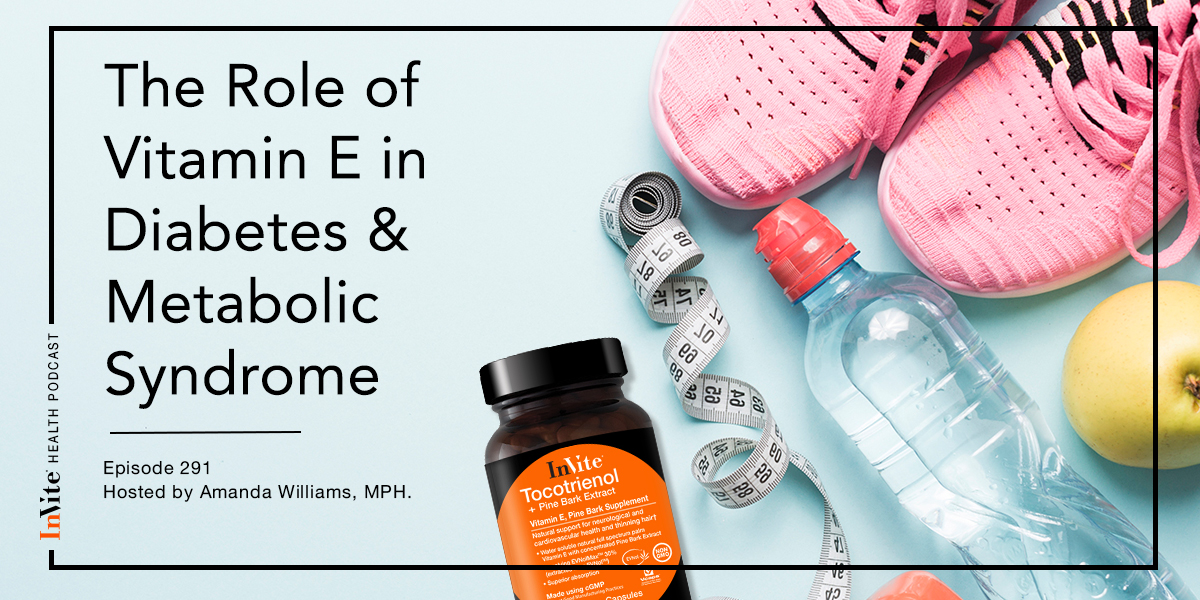 Did you know that one out of every ten Americans is a diabetic and one out of every three Americans is a prediabetic? Those numbers are incredibly alarming and there are a variety of different reasons as to why those numbers are so high. We can certainly look at the dietary implications and that direct correlation to poor diet and the onset, as well as the true development, of metabolic syndrome, prediabetes and leading into Type 2 diabetes. Today, I want to talk about an under-reported vitamin that can really be quite beneficial for those who are dealing with diabetes, as well as those who fall into that category of prediabetes.†

We have a really interesting formulation and that is our Tocotrienols with Pine Bark Extract. The tocotrienol is a special, unique form of Vitamin E. Generally speaking, when we talk about diabetes, prediabetes or metabolic syndrome, we’re usually focused on different nutrients that can help to enhance insulin sensitivity, which is certainly very important. But I want to talk about recent findings on Vitamin E in the setting of diabetes.†

There was a recent article that came out in the Journal of Diabetology and Metabolic Syndrome where they were talking about antioxidant effects of vitamins in Type 2 diabetics. They did a meta-analysis of randomized, controlled trials looking at different vitamins and essential micronutrients, including minerals, and the impact that they could have on the glycemic index of Type 2 diabetics. Interestingly enough, a lot of the primary focus was on things such as B vitamins, Vitamin C and Vitamin D, but they also addressed Vitamin E in this particular study. The researchers said that Vitamin E was related to significant reduction of blood glucose, as well as hemoglobin A1c, compared to placebo. This was an interesting study in which they were able to really determine the impact of each individual vitamin in terms of how it was impacting someone’s blood sugar levels.†

When we think about supplementation of Vitamin E, this is oftentimes one of those very overlooked vitamins and it really helps to enhance that antioxidant capacity. We know that Vitamin E is incredibly strong when it comes to being able to fend off oxidative stress, but now we also recognize that it can also target that glycated hemoglobin. We know that it’s that glycation that creates such significant problems within the entire body.  I want to talk in detail about why it is that Vitamin E can have this beneficial role in the control of those who are dealing with metabolic syndrome, as well as Type 2 diabetes.†

Another study that came out was in the Journal of Clinical and Diagnostic Research, talking about that very significant role that Vitamin E can play. What they concluded within this was that there was a beneficial development for diabetic patients. Those patients who were on Vitamin E supplementation had a delayed development, as well as a slowing progression of the complications of diabetes. The researchers concluded that Vitamin E supplementation was really an integral component to the support of diabetics because of the fact that they could recognize how it could actually slow down that progression and the significant complications that go along with diabetes.†

This particular study was looking at both Type 1 and Type 2 diabetics who had been diabetic for over five years, so they could see some of those longer, chronic issues that arise in diabetics. Through doing this, the researchers were able to assess different complications that can arise in the cardiovascular system, renal system and eyes, as well as different ulcers that can occur. Through doing this particular series of tests, what they actually were able to determine was that the Vitamin E treatment significantly reduced the risk of cardiovascular death. We know that diabetics have a greater risk of cardiovascular disease because of that chronic inflammation, as well as the destruction that actually occurs within the blood vessel lining. They found that diabetics who were actually taking Vitamin E had decreased markers of inflammation, including things such as C-reactive protein.†

Hear about more research relating to Vitamin E and diabetes by tuning into the full podcast episode.