Are Women More Likely to Suffer from Anxiety?

The Anxiety and Depression Association of America (ADAA) reports that anxiety disorders are the most common mental illness in the United States, affecting 40 million adults ages 18 and older, about 18% of the population. 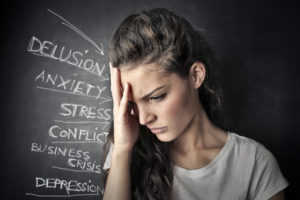 Published in the journal Brain and Behavior, a paper has revealed that women and young adults are suffering from anxiety in greater numbers globally than men – twice as likely, to be exact. Furthermore, individuals younger than 35 years old in North America and Western Europe are the most likely to be affected.

Lead author and doctoral candidate at the University of Cambridge in England reports, “Anxiety has not been given much importance in mental health research and in general. There has been a lot of focus on depression, which is an important mental health issue, but anxiety is equally important. It is debilitating.”

Some tips for coping with stress and anxiety by Jerry Hickey, R. Ph

Exercise is an excellent antidote for stress and anxiety. Aerobic exercise can reduce anxiety by up to 50% according to research. Exercise also improves sleep disorders. This is important because adequate rest improves the ability to respond to stress properly. The correct amount of sleep each night for most healthy adults averages 7 to 8 hours.

Decrease the amount of caffeine you consume; 2 cups of coffee doubles the amount of epinephrine (a stress hormone) your adrenal glands release. Epinephrine is a “fight or flight” hormone, and it plays a central role in the short-term reaction to stress. It is released from the adrenal glands when danger threatens or in an emergency, or if you are stressed out.

When secreted into the bloodstream, epinephrine rapidly prepares the body for action in emergency situations. The hormone boosts the supply of oxygen and glucose to the brain and muscles, while suppressing other non-emergency bodily processes such as digestion of food. Epinephrine increases your heart rate, dilates your pupils, and constricts the small blood vessels in the skin and gastrointestinal tract while dilating those in muscle improving the supply of blood and energy to muscle. Epinephrine elevates your blood sugar level. Like some other stress hormones, epinephrine has a suppressive effect on your immune system increasing your risk of upper respiratory tract infection (usually a flu or cold infection).