This Gene Increases The Risk of Alzheimer’s; How to Fight Back – InVite Health Podcast, Episode 301 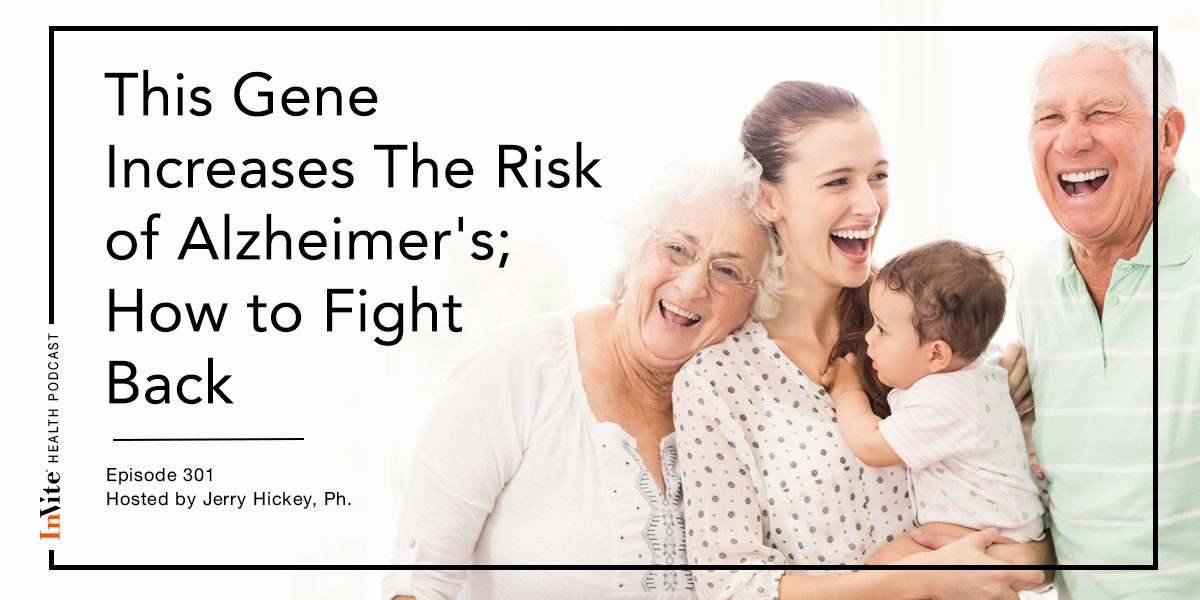 The APOE gene and its variants

There are three variants of the APOE gene and what it does is it brings lipids into the cells of your brain. That’s important because your brain is about 60% lipids. A lipid is a fatty substance. It’s part fat and part something else. Fish oils and vegetable oils, for example, mix with different things in the brain to make different components of brain cells.†

Once again, there are different APOE gene variants. There’s the APOE2 variant, APOE3 variant and the APOE4 variant. The E2 variant is thought to lower your risk of developing Alzheimer’s disease. If you inherited that from both parents, that’s wonderful. The E3 variant is neutral. It doesn’t seem to increase the risk of Alzheimer’s and it doesn’t seem to be protective from Alzheimer’s. It’s just going on brain business as usual. The E4 gene, if you inherit one copy, it increases the risk of Alzheimer’s disease, but if you inherit a copy from both parents, then it is all the more dangerous. About 15% of Americans have the E4 variant of the gene.†

The APOE genes bring lipids into your brain cells and the E2 and E3 variants of the gene do a good job with that. But the E4, instead of bringing lipids into the cell, actually clogs up the process. This causes the cells to die because they are clogged and inflamed and business is not going on as usual. Researchers at MIT found that the APOE4 gene significantly disrupts the ability of your brain cells to go about their normal functions, which is bad because you need them to think and solve problems.†

Lowering the risk of Alzheimer’s disease

There are proven ways to lower the risk of Alzheimer’s disease, even if you have the genetic susceptibility and the APOE4 variants of the gene. Leading a wholesome, healthy life can help. Getting enough sleep is really important because you detoxify and you rebuild your brain at night when you’re sleeping.†

The MIT researchers found that the APOE4 gene inhibits the ability of a brain cell to function normally, but they also found a solution. It’s called choline, which is a widely-available B-complex vitamin. It could reverse many of these effects, according to MIT. Choline really does have a tremendous effect on the brain. The MIT scientists found that choline really was reversing a lot of these effects.†

Choline is really important for the liver, your heart, muscles and nerve tissues, but you also need a lot of choline in your brain. Choline gets tagged with an acetyl group and it becomes acetyl-choline, which has amazing effects in the brain. It allows you to capture data and learning. You cannot learn without acetyl-choline. You also need it to get at what you learned. Acetyl-choline is also tied into creating new memory cells at night when you go to sleep.†

Learn more about what you can do to support your memory health and reduce your risk of Alzheimer’s disease by listening to the full podcast episode.