The Importance of Vitamin D for Strength and Mobility – Invite Health Podcast, Episode 158 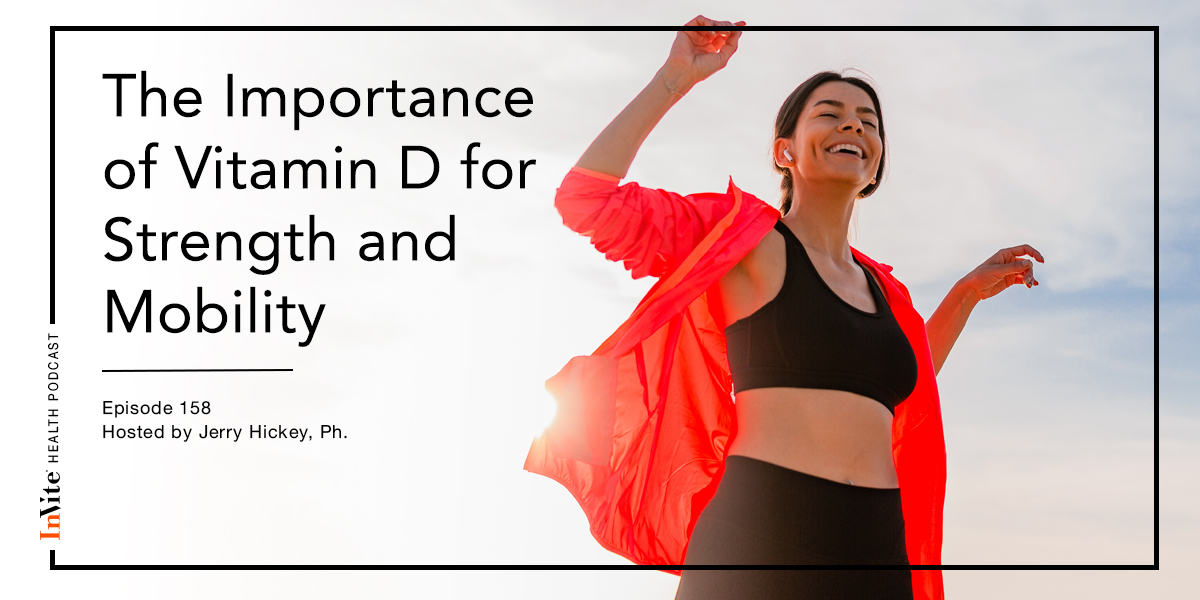 Can Vitamin D improve strength in younger people and help you keep mobile when you are older? That’s what we’re going to be discussing on today’s podcast episode. There are numerous studies that say that is true! Let’s discuss.

A recent headline reads, “Can Vitamin D Make You Stronger?” Well, a study from the University of Birmingham makes that case. Increased levels of Vitamin D led to stronger leg strength, according to the study published in the journal PLOS One. The level of Vitamin D was studied based on blood levels, not just dietary consumption. If you have young, healthy skin and you are out in the sun, the sun interacts with the cholesterol in your skin, then your liver, and then your kidneys all to be converted into the active form. In this particular study, researchers used the active form of Vitamin D.

A review of 310 adults (between the ages of 21 and 32) from seven different human clinical trials from Queen Mary University in London, found that Vitamin D supplementation increased upper arm and lower leg strength. The precursor that is stored in the liver is not yet activated (it has to go through the kidneys to be activated). The amount coming from the liver is easy to check because it is stored in the blood for two weeks. This level should be at least 35 and these studied indicate that that is enough to provide the muscle strength benefit. This does not mean that a level of 35 is perfect for all of the different benefits and attributes that come from the vitamin. Some of the its activities require higher levels in the blood, like a level of 50 or 55. I believe that a level between 50 to 75 is perfect. That Vitamin D then travels to the kidneys, interacts with Magnesium and is then converted to the fully active form.

The National Football League (NFL) holds a combine, where college athletes are tested in front of coaches and scouts. In 2014, the blood levels of vitamin D in 214 athletes were studied by researchers and they found that the athletes that had low levels, also had a higher risk of breaking or fracturing a bone and poorer muscle function. Over half of the athletes trying out for the NFL (59%) had inadequate Vitamin D. An additional 10% were actually deficient. The Hospital for Special Surgery in New York reported, “our study revealed that 86% of the players who missed competition because of strain injury had inadequate levels of Vitamin D. Lower extremity muscle strength or core muscle injury was present in 50% of athletes, which was stronger associated with lower Vitamin D levels.”

How Vitamin D and Fish Oils Can Help With Fading Muscles. Listen Now >>

A study done of the Pittsburgh Steelers found that 69% of the team members had low Vitamin D. They collected this data pre-season during their training camp. Those with the lowest levels were much more likely to get injured and were released from the team due to their injury. A separate study in 2011 was done on the New York Giants, where 30% of the team members had low levels themselves (to the point of deficient), 51% were insufficient (low but not deficient), and 17% were normal. They found that muscle injury was strongly correlated with the amount of Vitamin D.