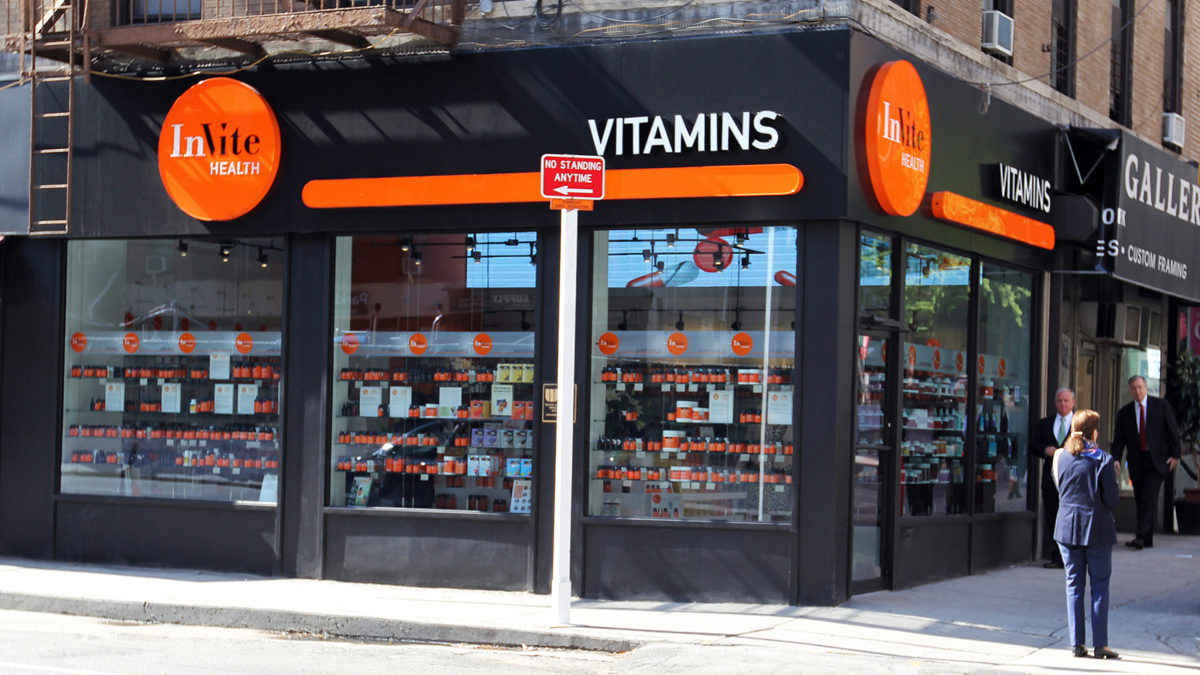 On a Thursday afternoon in Midtown, Steven Kornblatt walks into one of his InVite Health vitamin stores. Lining the walls are bottles of vitamins in every imaginable form-liquid pills, tablets, tinctures, powders, and even gummy bears. Stopping at the “anTEAoxidant” bar, Kornblatt orders a meal replacement shake and a blueberry soda. He grabs a muffin from the shelf beside the register, thanks the barista, and heads upstairs, exchanging greetings with the in-house nutritionist on the way.One of nine InVite locations in Manhattan, Queens, Long Island, and New Jersey (but the only location with an anTEAoxidant bar), this upscale vitamin store is the modern version of the old-time neighborhood apothecary shop. Whether it’s a blueberry soda you’re looking for or a supplement for boosting immunity, dealing with the side effects of prescription drugs, or managing weight, the staff is friendly, attentive, and ready to help.”In the old days, people would walk into a pharmacy and the pharmacist would tell them what they should try, what might help them- he was the neighborhood health care advisor,” says the Bronx-born Kornblatt, InVite’s CEO and owner. “That’s really similar to what our store is, except we do that with natural products instead of prescriptions.”Kornblatt founded InVite in 1998, but his passion for health and nutrition developed 28 years ago, when his father suffered a massive heart attack at the age of 58. “The doctors gave him 12 months to live, they sent him home to make his will, get his papers in order, and spend time with his family,” he says.But the family decided instead to take their father to Arizona to see well-known integrative medicine expert Dr. Andrew Weil. Dr. Weil drew up a protocol of nutrients designed to work with the prescription drugs Kornblatt’s father was taking. “The end of the story,” Kornblatt says, “is that my father is 85, and he was just here for my son’s bar mitzvah in May.”

It was during his father’s treatment that Kornblatt got serious about his own health. He began to work out, eat right, and learn about vitamin supplementation. After graduating from college in the city, he opened a jewelry store in the Garment District. While there, he met a customer originally from Hamburg, Germany, named Christine, who eventually became his wife.

When he sold the business after over 20 years, he decided it was time to make a career out of what he was most passionate about. He had Dr. Weil work with another natural medicinist to formulate the InVite multivitamin- still the company’s core product-and the business grew from there. Today, there are six InVite stores in Manhattan alone, and InVite products are sold at Duane Reade, The Vitamin Shoppe, and through Fresh Direct. In 2001, Kornblatt partnered with pharmacist and radio personality Jerry Hickey, R.Ph., founder of the integrated pharmacy Hickey Chemists, who hosts InVite Health Radio six days a week-a show that is broadcast throughout the tri-state area as well as in Boston, Boca Raton, Cleveland and now 10 other cities. Hickey also serves as the company’s scientific director. He formulates each InVite supplement to maximize its health benefit by considering factors like how the vitamin is best absorbed, what form it should be taken in, and correct dosage.

What makes InVite different from other vitamin companies is an approach Kornblatt learned while selling jewelry. “The vitamin business has been treated as a mass-market environment that’s just driven by price,” he says. “It needed to be treated the way I treated my jewelry, where it’s about the quality, the craftsmanship, and making a better product. Especially when it’s something that you’re putting in your body, that you’re giving to your family.”

And higher quality, Kornblatt adds, means fewer choices for a confused customer to have to make.

“I don’t want to go into a store where they have 20 brands of echinacea,” he says. “We have one brand of echinacea, because we know that we’ve tested it, we’ve formulated it in the right dose, in the right form, with the right capsule, and with the highest quality ingredients we know of.”

InVite is also unique in that it is able to marry traditional and natural medicine. A patient experiencing the unpleasant side effects of an antibiotic, for example, can head to an InVite store for just the right probiotic to replace the “good” bacteria necessary for proper digestion. And not only will the patient be given the right probiotic, but he or she will be told when to take it, how much to take-even whether to refrigerate it.

“There isn’t anyone who can give you both sides,” Kornblatt says. “You’re either on your own, searching the Internet, talking to salespeople, and trying to put all these pieces together, or you’re at your doctor, who’s not interested in educating you about nutritional supplementation-assuming he even knows how to educate you about it.” InVite, he adds, is closing that gap.

What is more, Kornblatt lives and breathes the InVite philosophy-integrating vitamins into people’s everyday lives-in the everyday life of his own family. His stepdaughter Alexa, 16, and son Luke, 13, were the first to taste the now best-selling antioxidant gummy bears. The kids were taught healthy eating habits, along with the basics of nutritional supplementation, from an early age. Exercise is a part of daily life; Luke plays basketball and flag football, Christine jogs each morning in Central Park, and Kornblatt works out four to five times a week. Like Kornblatt, Alexa and Luke are city kids through and through. “We live on the Upper East Side in Germantown/Yorkville, and we’re a block from Carl Schurz Park, so the kids had a place to play when they were little,” he says.

As for his goals for InVite, Kornblatt plans to expand the company’s web and radio presence, and is currently developing more products, like antioxidant-rich sodas, natural beauty products, and other everyday items that are more versatile than the standard daily multivitamin-items that stay in the fridge or bathroom rather than the medicine cabinet-and can enhance the overall health of a busy family.

Ultimately, Kornblatt’s commitment to improving lives through vitamins is inspired by his desire to keep his own family as healthy as possible. “Sometimes I say to myself, ‘What would I do if my stores disappeared tomorrow, and I had to buy vitamins for my family?'” he says. “I wouldn’t know where to buy them, because nothing I would find would be made with the quality and care and education that we put into it.”

Read along and share your thoughts. Let us know what you think!