How SAMe Can Help Against Depression – Invite Health Podcast, Episode 153 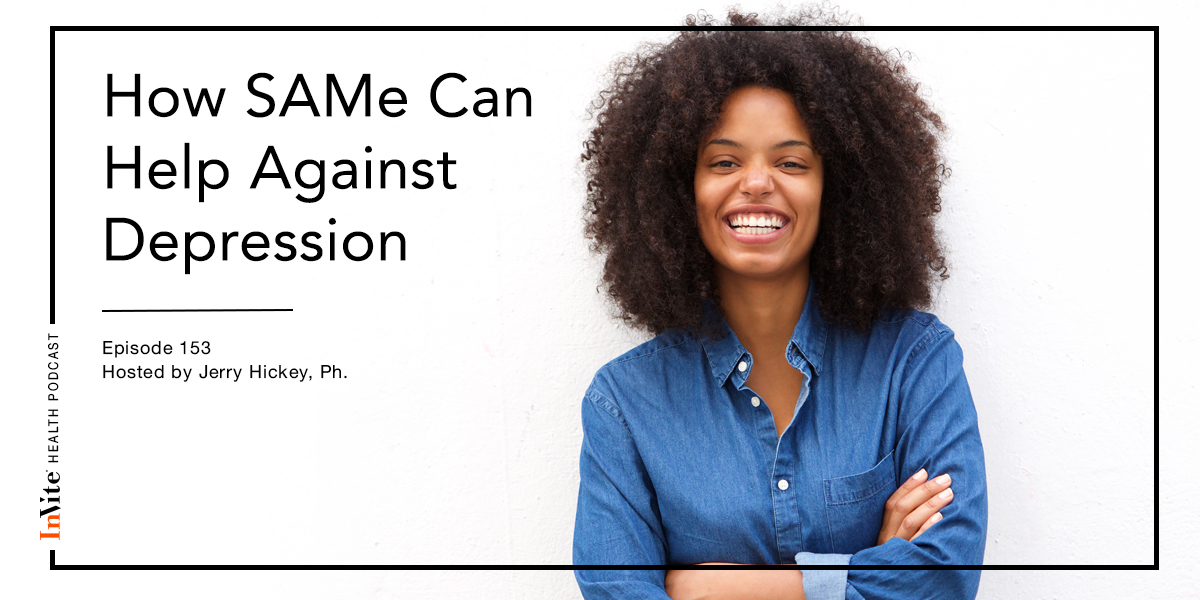 SAMe, or S-Adenomethionine, is a compound that we naturally make in the human body. Our highest concentrations are in our liver and our brain. SAMe has been shown to help maintain a stable mood and to support joint and liver health. But this compound has also been studied for its benefit against depression. Depression effects about 15 million Americans each year. The annual cost for treatment is about $50 billion.

What is SAMe’s role in the body?

This compound does a bunch of things in the human brain. It has an anti-inflammatory effect because it raises the level of a very key antioxidant called Glutathione. Glutathione levels vary from person to person and they drop with age. It breaks down peroxides which is important for the brain. Your brain is a super, high-energy organ. There is a great deal of circulation needed, in order to carry all of the calories from your food to your brain so you can use that for energy. In fact, is it thought that your brain takes 20%  of all of the calorie content from each meal! Yet, your brain is only 2% of the dry weight of your body. As a byproduct of using sugar for energy, the cell releasing peroxide. This can damage and destroy the cell, so the body has to have ways to find the peroxide, which is where Glutathione comes into play.†

SAMe has to be enteric coated (an additional coating) in order to get past the stomach acids and the intestinal enzymes, which can deactivate and breakdown SAMe.

An arm of the government that is within the Department of Health and Human Services is called The Agency for Healthcare Research And Quality. Their job is to collate evidence so that different organizations and agencies can base clinical guidelines off of them. When it came to SAMe and depression, researchers compiled 28 human clinical trials in their meta-analysis. In all 28 trials, SAMe worked; it improved the Hamilton Rating Scale for depression (a questionnaire that helps doctors judge how severe depression is and how to guide them regarding treatment).

Published in the American Journal of Psychiatry from the Center for Treatment Resistant Depression from Massachusetts General Hospital and Harvard Medical School. Researchers added SAMe to the SSRI drugs of 73 patients who had major depressive disorder. They found that if they added SAMe to the drug (in patients where the drug was not working), the drugs started to work. It was far superior to placebo.

Questions about SAMe for Depression? Leave a comment below to join the discussion!