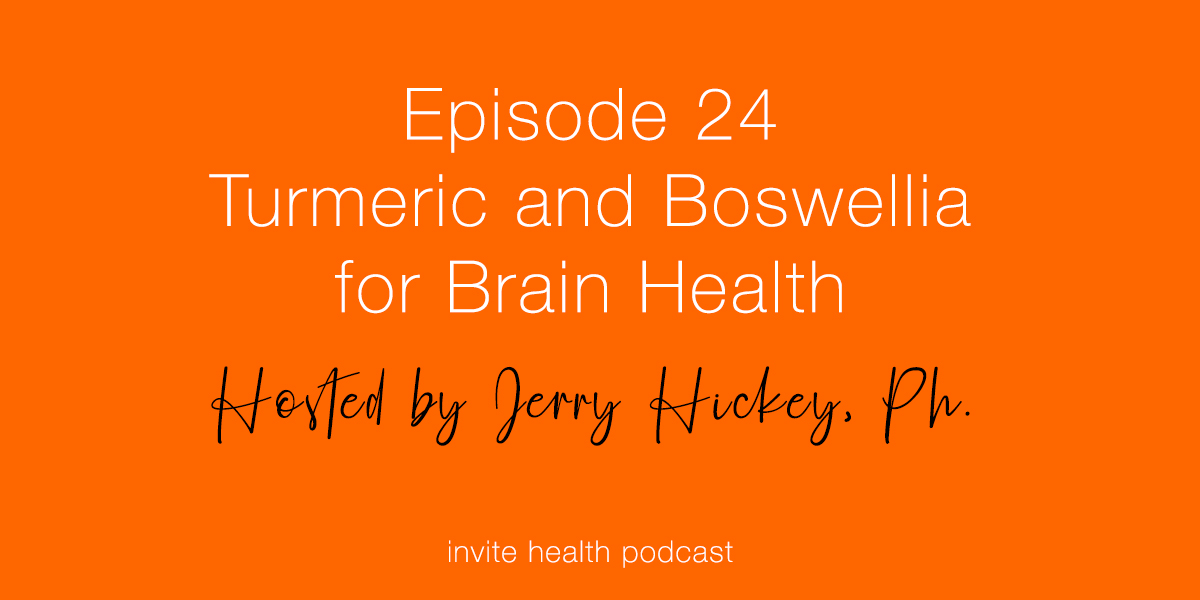 I’m getting a bit older, and although I am not worried about dementia, I do like to use nutrients that protect my brain. Turns out, both herbs also protect the brain during the aging process and have been shown to improve day-to-day memory.

You have probably heard of Curcumin, many companies use this as the headliner in their joint health formulas. Sadly, Curcumin is only one ingredient out of 235 different constituents so far discovered in Turmeric and curcumin makes up 2% to 5% of the plant ingredient. In fact, if you don’t make the Curcumin more water soluble it will be very poorly absorbed.

Besides, research out of Baylor University Medical Center in Dallas, Texas shows you need the complete plant, and it should be safely modified to be well absorbed to obtain it’s true level of benefit. This is why Baylor has chosen BioCurcumin for their human clinical research.

Turmeric containing curcuminoids is usually available ground, as a fine, bright-yellow powder. It is a major constituent in curry, giving it both its color and flavor. The medicinal history of turmeric is at least 2500 years old. Ayurveda, Unani, Siddha and Chinese medicine recommend turmeric for a large number of disorders and diseases. Ayurvedic medicine was the first scientific form of medicine. In it, the effects of plants and therapies for differing conditions were observed and systematized.†

But Turmeric is poorly absorbed. BioCurcumin is extremely well absorbed and research shows it readily enters our human brain, offering multiple benefits according to a number of human clinical trials. Interestingly Curcumin and Turmeric only last for several hours in the human body.

BioCurcumin contains the whole plant. In fact, 95% of it is the active ingredients and this matters. Most supplements from Turmeric only offer curcumin. There are a number of other related ingredients such as demethoxycurcumin and bisdemethoxycurcumin that are actually more beneficial than the often cited Curcumin itself.

BioCurcumin offers the full spectrum of these curcuminoids. Additionally, it supplies the Turmeric-essential oils, including aromatic-Turmerone which are very important for brain health and memory support; Curcumin products lack these important constituents.

BioCurcumin is grown organically, and in fact is grown 100% using solar power in soil that has never been exposed to pesticides. It consists of the all the ingredients found in Turmeric and is safely extracted without the use of toxic solvents. When other companies use cheap solvents to extract their Curcumin, these can never be totally removed from the finished product and this is why InVite® never uses an ingredient obtained by the use of toxic solvents.

In BioCurcumin, the powerful polyphenolic Curcuminoids and the terpene essential oils are present and they strongly combine to reduce joint discomfort and inflammation in your knee but they also work together for brain health; you need the combination of all of these ingredients and not just curcumin.†

In a recent study published in the journal Archives of Gerontology and Geriatrics combining Boswellia serrata with the herb Lemon Balm improved various aspects of memory in a day-to day manner in a group of older adults. 5-Loxin is obtained from the resin extract of the frankincense plant and it is very safe and works very well for joint discomfort and works very quickly to offer relief and as it turns out, it also addresses inflammation in the human brain. 5-Loxin is superior to typical Boswellia serrata extracts.†

In a clinical study of children being treated with radiation at the University of Freiburg Hospital in Germany, adding the herb Boswellia serrata to the powerful steroidal anti-inflammatory drug dexamethasone strongly improved the number of children with a reduction of swelling caused by radiation related in their brains of children and it was very safe.

Turmeric, if modified to be well absorbed, has many studies demonstrating its impact on our mood and memory. Five different studies show BioCurcumin improves mood if used alone or added to prescription antidepressant drugs such as fluoxetine and once again it was very safe to use in these vulnerable patients.†

Interestingly, the way BioCurcumin achieves this mood improvement may be related to the way it improves memory and it has to do with a healing factor in the brain called BDNF. BDNF is the abbreviation for brain derived neurotrophic factor. It is like Miracle Grow for the brain; brain fertilizer. Young people release a lot of BDNF every day and this triggers the formation of about 700 new memory cells in the hippocampus every day; the hippocampus is largely where memory takes place. This adds up in a very good way – brain cells die off all of the time in a process called apoptosis to remove senescent cells; they must be replaced and BDNF triggers the replacement of memory cells. In this way you keep the brain young and active and by the time you’re fifty you have replaced all of your original memory cells with these newly formed neurons.†

Ten years ago we didn’t know you could create new memory cells.

Older people release a lot less BDNF therefore they are replacing fewer and fewer senescent memory cells every day and this adds up in a bad way leading to memory loss, an inability to learn, and in some, brain shrinkage.

In a recent study published in the journal Nutrition Research scientists performed a systematic review of the literature. They found four high quality studies showing that Turmeric supplementation significantly increased the level of BDNF in the serum of study subjects. This leads to the formation of new hippocampal memory cells. Creating new memory cells is a way that antidepressant medication also improves depression so this could be at least one of the ways that BioCurcumin is good for both depression and good for day-to-day memory enhancement.†

In another recent study of healthy older people aged between 50 to 80 from Swinburne University in Australia, giving them a very well absorbed curcumin for 12 weeks significantly improved working memory and reduced brain fatigue compared to taking placebo. Stressful mood components such as anger, tension, and confusion also improved in the Curcumin group.†

Very importantly, a subgroup of 30 of these subjects at UCLA also had PET scans of their brains to assess the level of beta-amyloid plaque formation and the tangling and extremely destructive tauopathies that kill bundles of nerves in regions of the brain involved with memory. Analysis of the PET scans connected cognitive benefits such as improved memory with a decrease in tangle and plaque accumulation in these brain regions responsible for mood and memory. The UCLA study is published in The American Journal of Geriatric Psychiatry.

Importantly a review of six human clinical trials by Chinese neurologists giving well absorbed Turmeric/Curcumin to older subjects significantly improved memory and it was as safe as placebo, the same level of safety seen in all of these other studies.†

In a study published in the Journal of Psychopharmacology using BioCurcumin in elderly subjects aged 60 to 85…giving the Turmeric product for a month saw an improvement in brain function very quickly. An hour after taking BioCurcumin, working memory and sustained attention had already improved and the elderly were less fatigued after performing a mental challenge compared to those on placebo.

Unfortunately research shows that giving regular Turmeric as a supplement will not reach the brain; not enough is absorbed into the blood stream from the digestive tract to make a difference. It has to be a well absorbed Turmeric such as BioCurcumin to truly reach the brain in a concentration high enough to protect and improve memory and mood. With the addition of 5-Loxin we are helping to restore protective antioxidant activity to the aging brain. Antioxidant protection strongly declines in the brain in our late fifties. Free radicals can then harm and destroy memory cells. It is very important for older adults to utilize antioxidants that offer valid protection for their brain.†