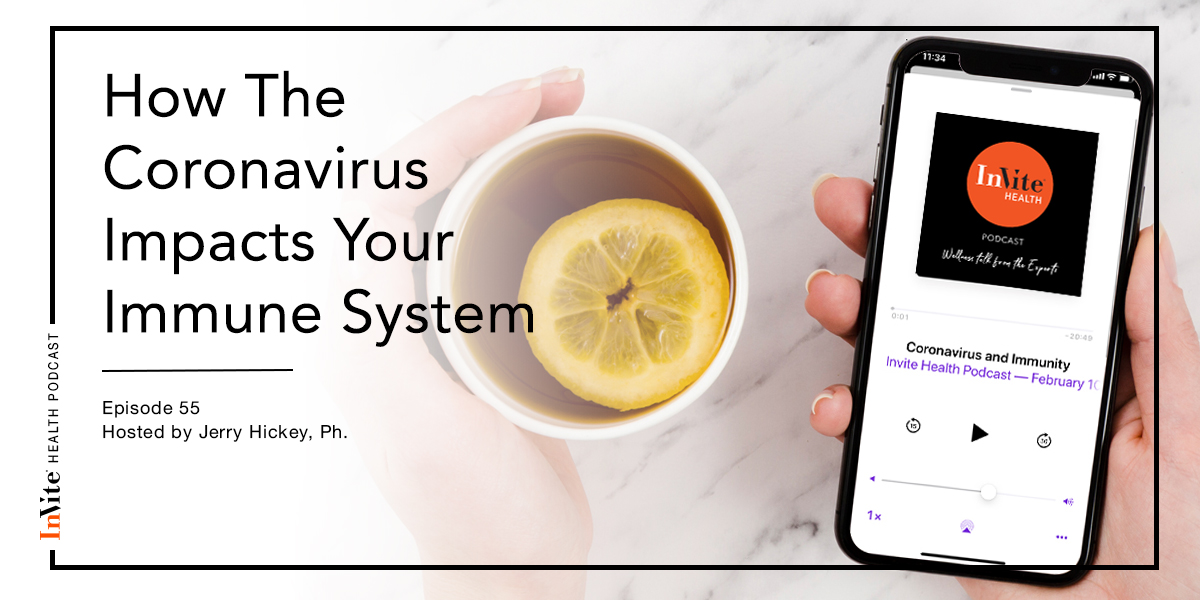 The headline on Medpage this morning is alarming; “Wuhan Coronavirus Looks Increasingly Like a Pandemic according to Experts.” Rapidly rising caseloads alarm researchers, who fear the virus may make its way across the globe. But scientists cannot yet predict how many deaths may result. The purpose of today’s episode is not to alarm you. But you should know how to support and actually improve the function of your immune system with the help of nutrition. This in turn, if you are exposed to a dangerous virus, should make you more resistant to viruses in general but also you are a great deal less likely to become exceedingly sick; in other words improving survival by making you stronger.

So, what is the Novel Coronavirus?

It’s also called the Wuhan virus because of the city in China where it spread from. You probably have had a mild coronavirus at some point in your life because this is a whole family of viruses and some milder strains of coronavirus account for about 15% of all cases of the common cold. Almost all other colds are caused by the rhinovirus family of viruses

Unfortunately, sometimes, a dangerous version of the coronavirus emerges. In 2002, SARS emerged in Southern China. SARS stands for Severe Acute Respiratory Syndrome and it eventually led to over 8,000 cases, resulting in 774 deaths reported in 17 countries, with the majority of cases in mainland China and Hong Kong. It had an almost 10% fatality rate, according to the World Health Organization with no cases reported worldwide since 2004. In late 2017, Chinese scientists traced the virus origin to cave-dwelling horseshoe bats in Yunnan province in China.

More recently the Middle East Respiratory Syndrome (MERS) virus emerged. It is a coronavirus that causes respiratory tract infections. It’s symptoms range from mild to severe including fever, cough, diarrhea and shortness of breath. This infection, like most others, can become more severe in those with other health problems. The mortality rate with MERS is high; about one-third of diagnosed cases but its spread outside of a hospital is uncommon, MERS also comes from bats.

The new coronavirus, designated 2019-nCoV, was identified in Wuhan, the capital of China’s Hubei province, after people developed pneumonia without a clear cause, and for which existing treatments were not effective. The virus has human-to-human transmission, with the number of cases quickly climbing into the thousands by late January 2020. Several countries across Europe, North America and especially the Asia-Pacific reporting cases. Its incubation period (time from exposure to onset of symptoms) ranges from 2 to 14 days and there is evidence that it may be contagious during this period and possibly also for several days after recovery. Symptoms include fever, coughing and breathing difficulties. It can be fatal. As of 3 February 2020, approximately 17,486 cases have been confirmed, including in every province-level division of China. Chinese scientists quickly isolated a strain of the coronavirus and publish the genetic sequence so that laboratories across the world could independently develop tests to detect infection by the virus. The 2019-nCoV’s genome sequence is 75- to 80-percent identical to SARS-CoV, and more than 85-percent similar to several bat coronaviruses.

Three more cases of novel coronavirus were confirmed in California over the weekend, bringing the total U.S. cases to 11, public health officials said on Sunday. The ninth case was in a woman from Santa Clara County, who had recently traveled to Wuhan, China, according to CNBC. And late Sunday night, KSBW 8 reported the 10th and 11th confirmed cases in San Benito County, California, from a man, age 57, who traveled from Wuhan, and his wife, also age 57, who contracted the virus from her husband. Rumors continue to abound about three potential cases in New York City. According to the Wall Street Journal, one of the patients is younger than age 40, and is being kept in isolation at Bellevue Hospital. Samples have been sent to the CDC, with results expected early this week.

The good news; only about 15% of the 17,000 plus Chinese cases are considered severe but cases in China continue to multiply. Plus over the weekend: doctors in Thailand said several patients with novel coronavirus improved after treatment with a combination of the influenza drug Tamiflu and some virus inhibiting HIV medications lopinavir and ritonavir, according to Reuters.

All strains of viruses use enzymes to infect us, and if you can inhibit these enzymes you may weaken or sometimes prevent an infection. To a good degree, Green Tea inhibits enzymes specific to all flu viruses, cold viruses, and other infectious viruses. When someone sneezes – which seems to be how the coronavirus spreads – that sneeze can travel at a 100 miles an hour for ten feet; try and duck this in a packed train or room. Coughs travel at 50miles an hour for about 5 feet; lots of luck ducking that one also. When the virus hits you, it uses enzymes to latch onto your cells, enter them, and then multiply, leading to that typical week-long infection. The enzyme neuraminidase allows the flu and other viruses to attach to the mucus membranes in your nose, mouth, and the tear ducts of the eyes. The virus is then able to enter and exit your cells and cause an infection.†

Drugs have been developed to block these viral enzymes including Relenza and Tamiflu back in the 1990s. But Green Tea has been shown to inhibit the enzymes used by many viruses to infect us including neuraminidase but also hemagglutinin. The antioxidant catechins in green tea also inhibit the interaction of many viruses with the cell membrane after they have invaded a cell.†

According to a study from the University of Florida at Gainesville, Green tea also stimulates a particular type of immune cell called a gamma-delta T cell, which helps govern the ability of your immune system to fight viruses in general. The research shows that Green Tea also stimulates the release of interferon-gamma further helping contain viruses. Two observational studies and three randomized controlled studies were conducted to determine the efficacy of gargling with green tea according to the Japan Health Authority. As an example, results of an observational study assessed the effectiveness of gargling to prevent febrile diseases (fevers) and absence from school among healthy children. In their study, which followed 19,595 children aged 2–6 years, scientists found that fever onset was significantly lower – 68% lower – in those that gargled with green tea compared to those that gargled with tap water.†

In the Journal of Nutrition, the University of Shizouka School of Pharmacy, looked at 2663 school kids from different parts of Japan over 2 winters and found that drinking Green Tea 6 times a week decreased a diagnosis of the flu by a pediatrician by 40%. But if they drank green tea more frequently, it cut the risk by 46%.†

If you are going to brew green tea, make sure it is organic. Always add lemon to your green tea (not milk) – milk weakens the properties in green tea. The University of Florida shows that taking a concentrated Green Tea capsule 2 times daily over the flu season strongly cut the incidence of the flu. However, if a person did get sick, the infection was much milder and lasted for a much shorter amount of days. Green tea is shown to help protect the elderly. Elderly people have a weaker immune system and the classic flu shot works less effectively in them. In a study of 124 elderly residents of a nursing home, all of whom received a flu shot, gargling with green tea further cut the risk of developing the flu versus placebo.†

Other Supportive and Protective Nutrients