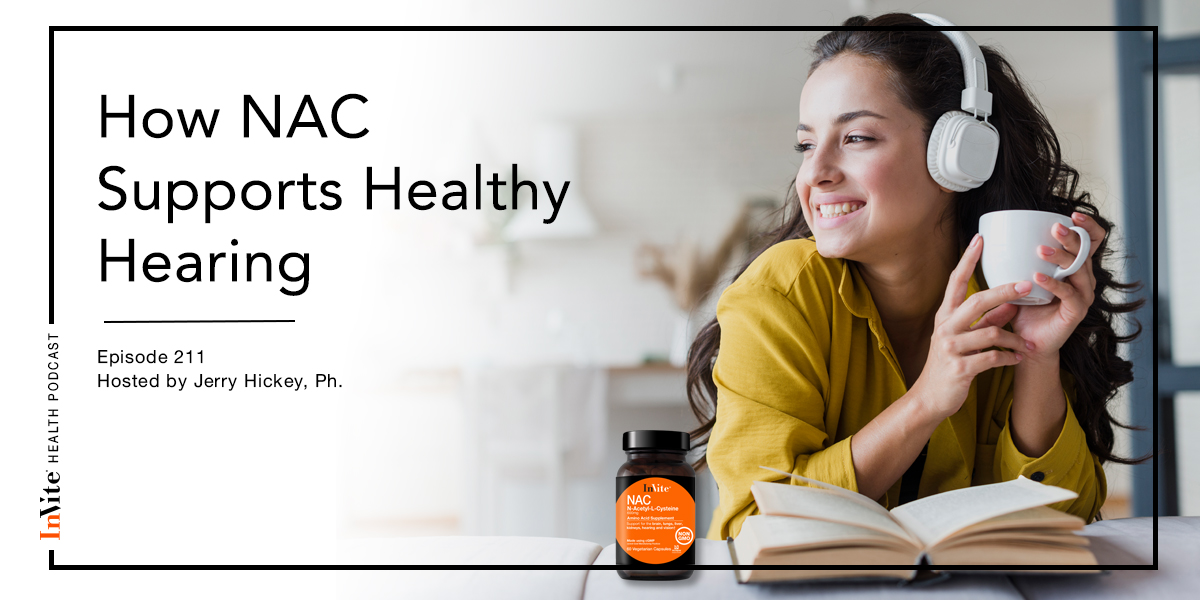 When you are waiting for the train or waiting in the doctors office for your appointment, it is common to grab your headphones or AirPods to listen to music or this amazing podcast. But, depending on the volume, you could be negatively impacting your hearing. NAC (N-Acetyl-L-Cysteine) is a very well-researched supplement that can support healthy hearing.

How do we hear?

Hearing depends on the presence of sound waves. Sound waves are changes in pressure caused by vibrating molecules. For example, if you slam your door it vibrates molecules, which changes air pressure that hits your eardrum. That’s the sound that you’re hearing. Sound waves influence the loudness, pitch, and timber of a sound. When we discuss loudness, it depends on amplitude. The greater the amplitude, the louder the sound. Amplitude is measured in decibels.

The outside of your ear collects sound waves and passes them along a canal to your eardrum, which is a membrane. When the sound waves hit the eardrum, it vibrates. The eardrum transmits the vibrations to three little bones called ossicles, which are in the middle of the ear. Their function is to make the sound louder by amplifying the vibrations. The vibrations then move to the cochlea in the inner ear, which is a coiled tube that is filled with fluid. Inside the cochlea are little hairs called cilia that are different thicknesses and lengths, so they separate the vibrations. The vibrations that reach the inner ear cause the fluid in the cochlea to move in waves. These waves make the hair cells move, picking up the vibrations and differentiating them. This triggers impulses to neurons that connect with the hair cells. Then, they bundle together to form your auditory nerve, which connects with your brain. The brain is where you finally hear the sound.

The number of cilia in the ear is limited, so if they’re damaged, they don’t grow back. Because they’re involved with differentiating sounds and vibrations, losing certain hairs leads to losing certain levels of hearing. Typically, this is what happens with noise-related hearing loss.

For more details about the hearing process, tune into the full podcast episode.

There are thousands and thousands of studies on NAC. Studies have used NAC as an antidote at poison treatment centers, especially for tylenol, which can be toxic to your liver, especially when mixed with alcohol. NAC is also used to break up phlegm. They also give people NAC before they go for a diagnostic test. NAC is unbelievable for allergies and is great for the brain.†

NAC is converted into Glutathione, which helps shut down and remove toxins through the kidneys and the liver. Young people have this very powerful available pool of antioxidants. They kind of dwindle with age, but they also vary from person to person. At the core of the antioxidant protection is this master antioxidant enzyme that lasts for several days called Glutathione. Glutathione is a master antioxidant for protecting your brain, eyes, lungs, and other parts of your body.†

A study done by the Center for Hearing and Deafness at the University of Buffalo and the Jackson Laboratory in Maine and published in the journal Aging looked at NAC in mice that were prone to hearing loss. The researchers exposed the mice to some noise and they found that if they gave the mice NAC, it was converted into Glutathione and it was protecting the hairs in their inner ears. If you can protect those hairs, you can support healthy hearing.†

Another study done by the Department of Otolaryngology Naval Medical Center in San Diego and published in the journal Hearing Research said that despite the use of hearing protection devices, noise-induced hearing loss is the number one injury to military personnel. The researchers gave two supplements, NAC and ALCAR (Acetyl-L-Carnitine), to lab animals exposed to noise. They found that these two supplements helped strongly reduce hearing damage. It also helped prevent the loss of hearing cells. The researchers said that both supplements help individually, but if you use them together, it’s extremely helpful in preventing damage to the little hairs in the cochlea.†

Tune into the full podcast episode for additional studies about how NAC can help with noise-related hearing loss.