What You Need To Know About Your Prostate Cancer Risk – Invite Health Podcast, Episode 105 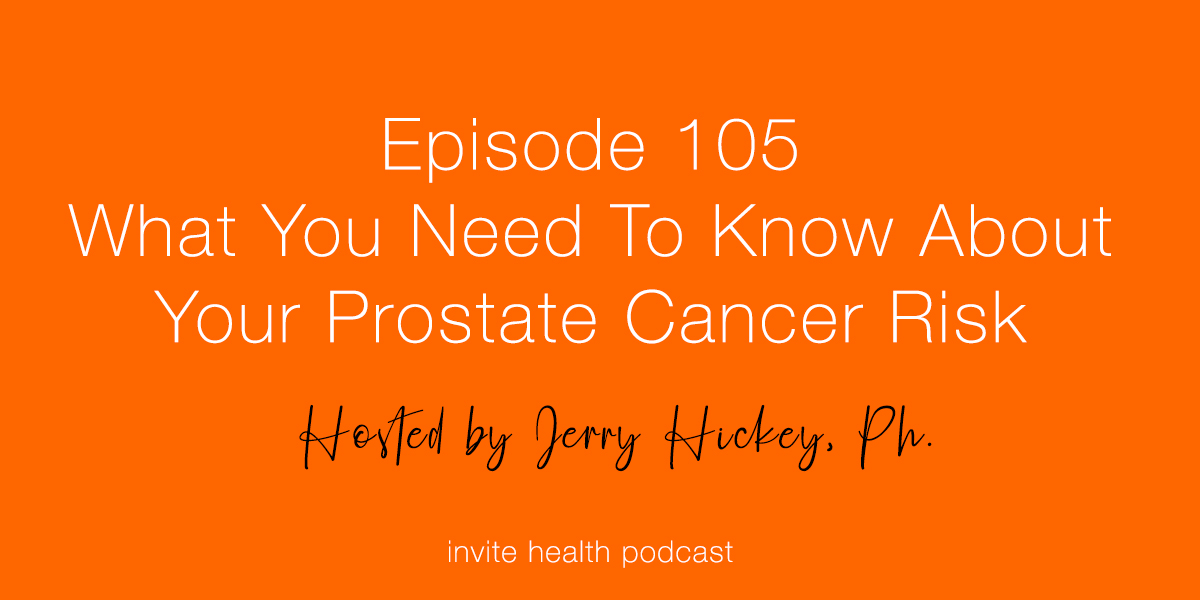 In the 1970’s when I started studying Pharmacy and the 1980’s when I started studying nutrition, scientists at leading academic research institutions were already trying to sort out what increases the risk for common cancers and what decreases the risk. And we’ve come a long way with that research; you can definitely point at lifestyle habits and nutrients that reduce your risk for prostate, breast, colon or pancreatic cancer and others that increase your risk. Now, prevention is different than treatment. It’s interesting to mention that may of the things that reduce the risk of prostate cancer, also improve the treatment. You will see this frequently in research. On today’s episode we will discuss things that men do every day that can increase their risk of developing prostate cancer and the lifestyle habits, foods and nutrients that may help to reduce that risk. Each part of this discussion is based on the results of multiple human studies.

Being Overweight or Obese

One of the risks for many cancers is being overweight, especially being obese. About 40% of Americans can be categorized as obese. In other words, they have an awful lot of fat. So many American adults are overweight, but a serious number of people are obese. Being obese is extremely dangerous; this increases your risk of sleep apnea, atrial fibrillation, snoring, back aches, knee pain, arthritis, and of course cancer.

According to a study published in the Journal of Clinical Oncology by The American Cancer Society in Atlanta, researchers wanted to know what happens to men who are overweight if they develop prostate cancer. This study highlights that there are connections between prevention and treatment. After diagnosis of prostate cancer in obese men, results showed that there was a prostate cancer specific mortality trend. In other words, these men were more likely to die from the cancer and have advanced stages of it. But they also had a much higher risk of dying from heart disease and all-cause mortality.

It is important to understand that excess weight not only increase the risk of prostate cancer, but it also makes it more dangerous. Part of the reason why this happens is that there is fatty tissue lining the prostate. This fatty tissue can contribute to the prognosis of prostate cancer. Science has found that, in obese men, this fatty tissue releases cytokines. These are chemical messengers that inflame the cancer and make it grow and spread more easily.

The Journal of Human Nutrition and Dietetics published a systematic review on what increases the risk of prostate cancer and what reduces it. In this review, researchers noted that red meat slightly increased the risk and found that processed meats was even more dangerous. Processed meats include hot dogs, spam, salami, bologna, bacon and sausage. Also to note when it comes to meat consumption, it seems to be worse if the meat is barbecued, smoked, fried or grilled.

Lycopene is what makes tomato sauce red. When you cook down tomatoes, you are releasing this red-pigment called Lycopene. So whenever you use Lycopene as a supplement, you want those tomato ollio resins in it and you want it to be natural Lycopene. A systematic review has found, if you have tomato sauce – or Lycopene (5mg or more, 2x a week or more) – it may help reduce your risk of developing prostate cancer. Also found, the amount of Lycopene in your blood is connected to a reduced risk of prostate cancer, an advanced prostate cancer or progression of prostate cancer in three recent-case controlled studies. In other words for men who had prostate cancer, if they had higher levels of lycopene in their blood, it was less likely to become dangerous or advance. A meta-analysis of other case-controlled studies (21 studies) and 10 cohort studies found an association between Lycopene and a decreased risk of prostate cancer. The research concluded that, “Lycopene – even when looking at Lyopene in the blood – was associated with a lower risk.”†