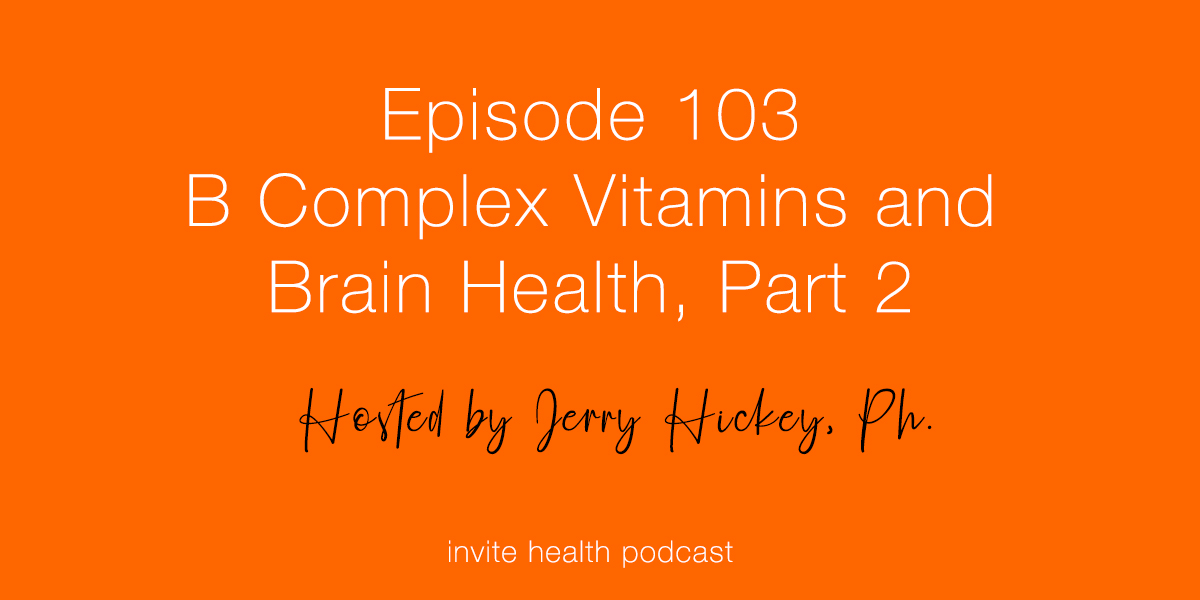 In Part 1 of this B Complex Vitamin episode, (click here to listen now) we discussed what six B Complex Vitamins are and how they work within your body. In today’s episode, we are going to talk about the last two specific B Vitamins – Vitamin B9 (Folate) and Vitamin B12 (Cobalamin) and your brain. But first we need to discuss an important amino acid that requires these B vitamins to function properly.

Amino acids make us and also allow us to function. Amino acids come from the digestion and metabolism of protein. Amino acids strung together is what makes all protein. One of these amino acids is Methionine. It derived from the digestion of protein and is an important sulphur-containing amino acid. Methionine improves the tone and pliability of skin, hair, and strengthens nails. It is involved in many detoxifying processes; the sulphur provided by Methionine protects cells from pollutants, slows cell aging, and is essential for absorption and bio-availability of selenium and zinc. Methionine attaches to and removes heavy metals, such as lead and mercury, aiding their excretion. It also acts as a lipotropic agent and prevents excess fat buildup in the liver. You require B complex vitamins to properly control the metabolism of the thyroid.

In order for Methionine to perform all of these functions, it requires three different B complex vitamins – Vitamin B6, Vitamin B12, and Folate. A lack of Vitamin B12 or Folate leads to an elevation of an amino acid called Homocysteine. This can be damaging because, if elevated, it is a proxy for inflammation). When Homocysteine is elevated, it inflames our brain and is connected to depression, shrinkage of the brain with memory loss, and likely also dementia including Alzheimer’s. So Methionine is not the bad guy here but rather a lack of B Vitamins which leads to Methionine being only a “half way point” or the damaging Homocysteine.

Homocysteine is a common amino acid in your blood but that doesn’t mean this is a good thing. High levels of it are linked to early development of heart disease and also over time issues with our brain. Abnormally high levels of Homocysteine in your blood serum, above 15, is a medical condition. This can be a significant risk factor for the development of a wide range of diseases, including blood clots, neuropsychiatric illness including depression and shrinkage of the brain, bone loss and an increased risk of bone fracture. Most labs report normal ranges of Homocysteine as about 4-15 µml/L.

In 1969, Dr. Kilmer S. McCully reported that children born with a genetic disorder called Homocystinuria, which causes the Homocysteine levels to be very high, sometimes died at a very young age with advanced atherosclerosis in their arteries (hardening of the arteries). Homocysteine levels in the blood may be elevated for many reasons. More specifically, these reasons can be divided into severe genetic causes and other milder causes, such as lacking B Vitamins.

A high level of Homocysteine in the blood makes a person more prone to endothelial cell injury, or damage to the blood vessel wall which can lead to inflammation in the blood vessels and atherogenesis (clogging of the arteries), which can result in ischemic injury.  Hyperhomocysteinemia is therefore a possible risk factor for coronary artery disease. Coronary artery disease occurs when an atherosclerotic plaque blocks blood flow to the coronary arteries, which supply the heart with oxygenated blood. Hyperhomocysteinemia has been correlated with the occurrence of blood clots, heart attacks and strokes, though it is unclear whether hyperhomocysteinemia is an independent risk factor for these conditions; some studies show you need other heart disease causing risk factors to accompany it, to make the elevated homocysteine truly dangerous but it is never good to have an elevated blood levels of homocysteine.

There are definite correlations between elevated homocysteine and poor brain function. A number of modern meta analysis of data for more rigorous recently published human clinical trials provide evidence of this connection. Research demonstrates that a series of samples featuring elderly adults shows a clear relationship between elevated homocysteine and dementia was published in the American Journal of Geriatric Psychiatry. Elevated homocysteine in the blood was associated with a 35% increased chance of subsequently developing dementia across eight studies Alzheimer’s and Dementia 2011 and a 50% greater chance of suffering clinically significant cognitive decline across a further 14 studies European Journal of Neurology 2014. Interestingly, at the other end of the life-span, a single study also demonstrated a positive relationship between dietary folate intake and academic achievement in adolescents Pediatrics 2011.

Folate and Vitamin B12

The functions of these two vitamins are linked due to their complementary roles in the “folate” and “methionine” cycles. A deficiency in Vitamin B12 results in a functional folate deficiency, as folate becomes trapped in the form of methyltetrahydrofolate. This leads to a reduction in genomic and non-genomic methylation reactions in brain tissue, causing DNA instability and inability to repair genes. This in turn hampers neuronaldifferentiation and repair, promotes hippocampal atrophy, demyelination and compromise the integrity of membrane phospholipids impairing the propagation of action potentials. Lacking folate metabolism prevents the conversion of amino acids into the neurotransmitters serotonin, melatonin, dopamine, norepinephrine and epinephrine. You also cannot make enough brain nitric oxide.

The importance of all of the B complex vitamins for brain function is strongly illustrated by the neurological and psychiatric symptoms commonly associated with deficiency in any one of these eight vitamins. An example is Vitamin B6; the primary symptoms of vitamin B6 deficiency are neurological, including depression, cognitive decline and dementia.

Another example is vitamin B12. This deficiency is often manifested in the form of neurological symptoms prior to the appearance of more typical haematological changes (enlarged red blood cells). Notably, whilst about a third of those suffering folate or vitamin B12 deficiency present only with anemia, a similar proportion present only with neuropsychiatric symptoms. Indeed, more than a third of psychiatric admissions have been found to be suffering deficiencies in folate or vitamin B12.

In terms of the status of B vitamins in circulation, analysis of the data from 10 cross-sectional studies and one prospective study demonstrated a relationship between low folate and vitamin B12 and depression (J) Aging and Mental health 2016.

An analysis of data from 10 cross-sectional and three cohort studies showed that low folate was associated with cognitive impairment, typically assessed with the Mini Mental State Exam (MMSE) Journal of Aging and Health 2013.

A subset of studies that included more sensitive measures of vitamin B12 status (such as methylmalonic acid or holotranscobalamin) demonstrated relationships in terms of dementia or cognitive function. This was also noted in Epidemiological Review 2013 who conducted a slightly more restricted meta-analysis.