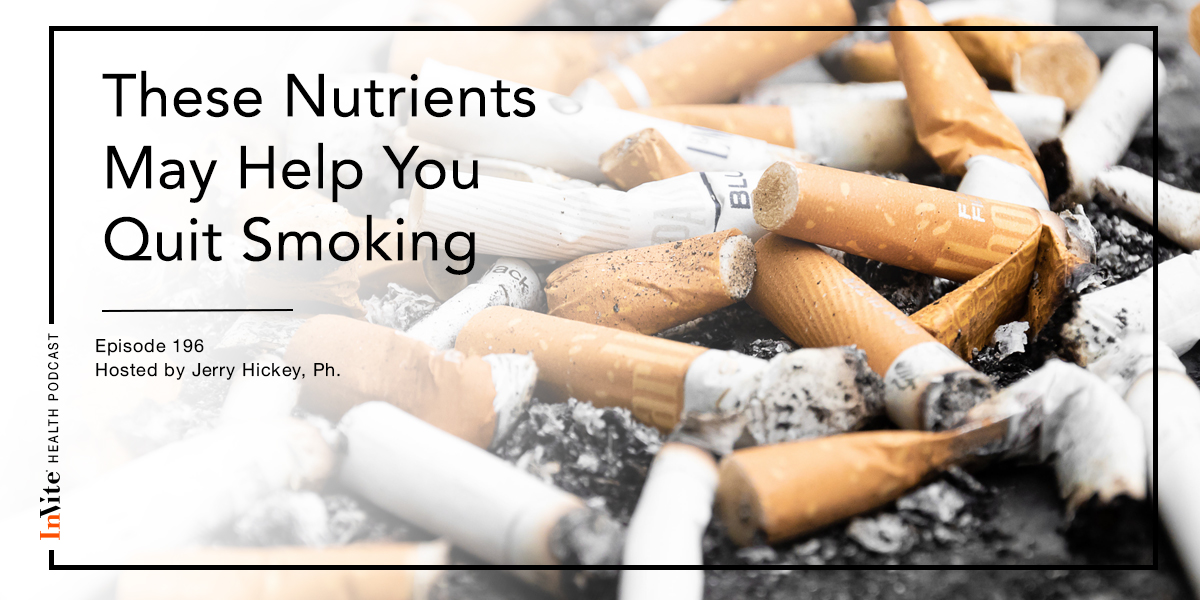 Today we’re talking about supplements that can help you quit smoking. It’s doable.

Smoking harms nearly every organ in the body. There’s more than 16 million Americans currently living with a disease directly linked to their smoking. For every person who dies because they were a smoker, at least 30 go on to live with a smoking-related illness. This includes a whole bunch of cancers, heart disease, heart attacks, strokes, brain damage, lung diseases, eye diseases, and immune system issues. There’s also erectile dysfunction, wrinkles, and thinning hair.

Many adults who smoke want to quit. In 2015, about 68% of adult smokers wanted to stop smoking. In 2018, about 55% of adults who were smoking made an attempt to quit. According to the Center for Disease Control and Prevention (CDC), quitting smoking is beneficial to your health at any age and smokers who quit before the age of 35 had mortality rates similar to those who never smoked. But at any age, at any point, you’ll feel improvements when you quit smoking.

Why is it so hard to quit?

Tobacco smoke contains nicotine, which gets into your brain very easily. It’s extremely addictive. Nicotine withdrawal often makes the process of quitting very difficult. When you’re addicted to nicotine, there’s both psychological and physical dependence, so when you try to quit, you get both physical and mental withdrawal symptoms. These include irritability, anxiety, and cravings. Withdrawal symptoms generally peak about 3 days after quitting and can persist for weeks or months, but they do subside.

Out of the smokers who try to quit on their own without assistance, only about 3 to 6% are successful long term. Some options for assistance include behavioral counseling and medications. Both of those increase the rate of quitting successfully. But when you combine them, it’s even a little bit better.

A meta-analysis of 61 studies from 2018 showed that among people who quit smoking with a cessation medication and perhaps some behavioral therapy, 20% were still not smoking a year later. For more information about drugs that can help with quitting smoking, tune into the full podcast episode.

Supplements can help you quit smoking

There are also supplements that can help with quitting smoking in conjunction with behavioral assistance and certain medications.

When you’re trying to quit smoking, if you get nervous and you’re eating too much, try 5-hydroxytryptophan (5-HTP). It’s very good for calming you down and helping your mood. It’s also really good for keeping your appetite under control. You want a time-release option, like our Trim Hx® formula, because 5-HTP’s effects only last for about an hour or two. The effects of Trim Hx® can last six or seven hours and it helps you contain your appetite. That’s good because a lot of people who quit smoking start to eat more.

Another supplement that’s helpful, especially for jitteriness, is the amino acid L-theanine. A study from the Chinese Academy of Sciences used filters made out of tea that were high in L-theanine. They found that this decreased smoking in users by 57%. 32% of those tested stopped smoking at least temporarily. The green tea plant holds a lot of L-theanine in the early stages of budding. This amino acid helps the brain and improves GABA and dopamine levels. These are neurotransmitters involved with satisfaction, self-control, calming down and enjoying pleasure. L-theanine helps restore the feeling of pleasure that is often overtaken by smoking or drinking.

The most important supplement when you’re quitting smoking is N-acetyl-L-cysteine (NAC). It’s very good for breaking many habits. It’s good for compulsive behaviors such as gambling, biting your nails or pulling your hair. It’s good for addictive behaviors if you’re trying to quit smoking, drinking or even a drug. The Department of Psychiatry at the Academic Medical Center in Amsterdam did a study looking at relapse that was published in the European Addiction Research Journal. They gave very heavy smokers either placebo or 3600 mg of NAC a day. The smokers were asked to stop smoking and report on their cigarette cravings, withdrawal symptoms, and any smoking they did during the trial. The people on NAC faced milder withdrawal symptoms. They were also asked to smoke a cigarette and report on how rewarding it felt. They found that people on the NAC reported the cigarette to be less rewarding.

Another study published in the journal Redox Report looked at people who were going to behavioral therapy but were not seeing improvements. It was a 12 week trial where they gave the subjects either placebo or NAC every day. NAC strongly cut back on the number of cigarettes people smoked every day. Over 47% of the people on the NAC were able to quit smoking. So the behavioral therapy with the therapist wasn’t doing it, but when they went on the NAC, they were able to do it. Tune into the full podcast episode for more studies about the benefits of NAC.

Questions about these nutrients that may help you quit smoking? Leave a comment below for Jerry Hickey, Ph. now!