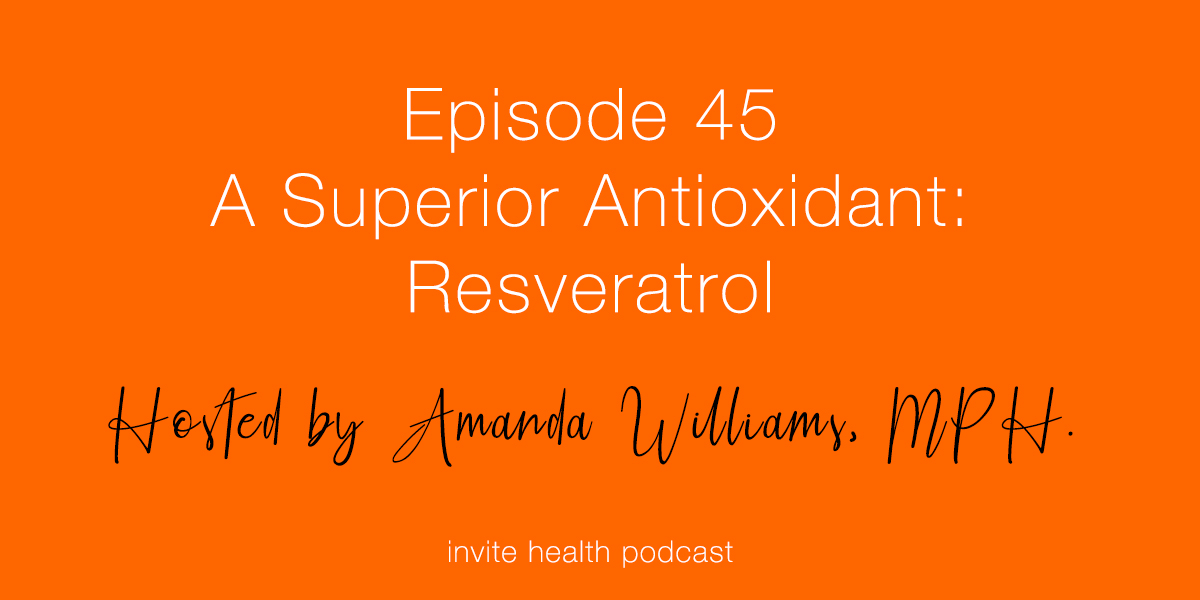 On today’s episode, I am going to be discussing what you need to know about Resveratrol, the coined anti-aging supplement that really gained momentum back in the ’90s. It was originally discovered in 1939, and found in things like wine. When it comes back to what it is actually doing in your body, this is a fascinating nutrient.

Resveratrol is a plant-based antioxidant that has a ton of health-promoting benefits. Most people correlate red wine with this antioxidant, but you can also find it in apples, blueberries, plums, pistachios and peanuts. One interesting component of Resveratrol is Japanese Knotweed – a really powerful plant that harbors trans-revseratrol.

Resveratrol first became popular with researchers when the “French paradox” was discovered in the 1980’s. The French paradox is the observation of low coronary heart disease (CHD) death rates despite the high intake of dietary cholesterol and saturated fat. What scientists have found is a strong correlation between red wine consumption and cardio-protective effects. It is from these original observations that we now know so much more about Resveratrol. As an antioxidant, it targets free radicals and limits the impact of oxidative stress on our cells.

The Science of Aging

Sirtuins are a group of proteins that are believed to protect us at the cellular level. Resveratrol has been shown to increase the activity of SIRT1 (a gene that has been identified as the possible cause of aging), published recently in the Journal of Science.

Researchers at Harvard University led the efforts to prove the power of Resveratrol in enhancing mitochondrial function and longevity. Lead researcher from Harvard, David Sinclair went on to say, “In the history of pharmaceuticals, there has never been a drug that binds to a protein to make it run faster in the way that Resveratrol activates SIRT1.” The findings on the anti-aging properties of Resveratrol have inspired many in the research world to dig even deeper into its potential as a breakthrough in human medicine.

In a study reported in The American Journal of Cardiology, researchers in Spain found that Resveratrol had obvious ability to shield the cardiovascular system in patients at high risk of developing heart disease. In fact these patients were already taking statin drugs; drugs known to reduce inflammation in the heart. Over the one-year course of the study, Resveratrol reduced CRP (inflammation) by 26% in these at risk patients. CRP is a protein in the blood and if elevated works as a proxy for inflammation. This alerts your doctor to the existence of inflammation occurring to the inner lining of the arteries in the heart. When CRP is elevated, it tells your doctor that you have a greater risk of stroke or heart attack. Resveratrol also lowered PAI-1 by 17%. PAI-1 promotes atherogenesis, or clogging of the arteries inside the heart through a buildup of cholesterol and PAI-1 also triggers blood clots like those of strokes and heart attacks.

Louisiana State University reports that antioxidant compounds found in red wine are enhancing the treatment of heart disease. They have developed a drug-illuminating stent with red wine antioxidants. Simply, they have designed a brand new stent that releases Resveratrol overtime that promotes healing by preventing blood clotting and inflammation. They also have some Quercetin, too. This is profound.