Why Alpha-Lipoic-Acid Is The King of Antioxidants – InVite Health Podcast, Episode 218 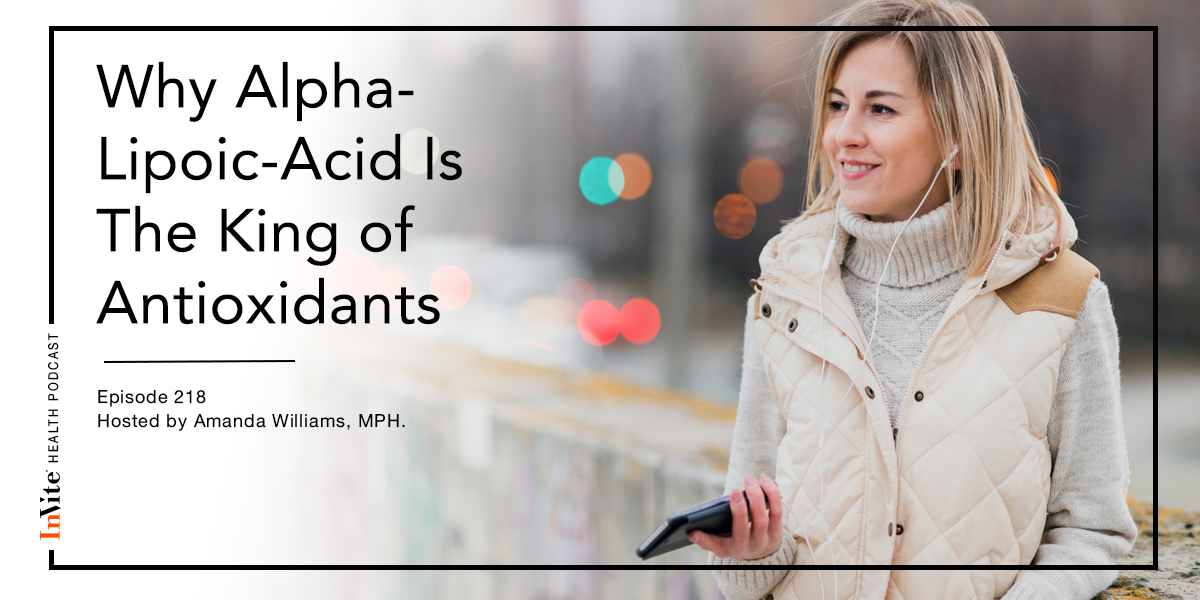 When we think of all of the amazing things that the human body does for us on an everyday basis, there is one area that we certainly cannot overlook and that is the role of antioxidants. Today, I want to talk about specifically what is known as the universal antioxidant in the human body – Alpha-Lipoic-Acid.

Alpha-Lipoic-Acid (ALA) is a fat- and water-soluble antioxidant, meaning that it’s going to work throughout the body in every single cell. It plays such a critical role in supporting healthy aging. It’s one of those naturally indogenous-occurring antioxidants that we so frequently overlook. It plays this significant and critical role in the regeneration of other antioxidants in our body, including things such as Vitamin C and Vitamin E.

We know that the core antioxidants that help to support our health and to fend off harmful free radicals and toxins are so incredibly crucial. We can think about Glutathione, for example. Alpha-Lipoic-Acid can really help in terms of the regeneration of Glutathione, which is important for metabolic detoxification, so just keeping us clean and healthy on a daily basis. Alpha-Lipoic-Acid is really important to this process.

We also know that Alpha-Lipoic-Acid does many other functions in the body, including supporting longevity, helping to maintain lean body mass, supporting healthy blood sugar already within a normal range, supporting nerve and brain health, and supporting memory function. Being that it is this very powerful antioxidant, we know that it is playing a critical role in metabolic detoxification. Those are those different phases that occur each and every single day in order to maintain our body’s ability to rid itself of harmful chemicals, as well as toxins.†

Learn more about how Alpha-Lipoic-Acid works inside the body by tuning into the full podcast episode.

Alpha-Lipoic-Acid has also been studied for its impact on specific disease states. There was a study that was done out in Oregon at the Oregon Health and Science University looking at the utilization of Alpha-Lipoic-Acid in MS patients, so patients who have been diagnosed with multiple sclerosis. This was published in the Journal of Neuroimmunology & Neuroinflammation. This was a double-blind, placebo-controlled trial where they took a group of multiple sclerosis patients, and over the course of two years, gave them 1200mg of Alpha Lipoic Acid daily. They wanted to see if this would have any type of an impact, because we know that in multiple sclerosis, we get this breaking down of that protective covering around the nerves. As that happens, you end up getting more and more damage that is occurring, which slows or blocks the electrical signals from firing from the brain, which is why they can end up having problems when it comes to muscles and eye function. If we can try to slow that process down by having a means to fend that off, this can be really, really important. In this study that they did at Oregon Health and Science University, they found a 68% improvement over the placebo group in terms of slowing the rate of whole brain atrophy in patients who had multiple sclerosis, which is absolutely fascinating.†

THE MANY BRAIN BENEFITS OF ALCAR AND ALA, PART 1 – INVITE HEALTH PODCAST, EPISODE 134. Listen Now >>

In an interesting study they did at the Buck Institute for Research on Aging, they found that the benefits of Alpha-Lipoic-Acid actually went beyond that of supporting kidney cells themselves. They actually found it could prevent kidney stones. This was in animal studies, but what they did was they led this clinical trial in patients who had chronic recurrent kidney stones. They published their findings in the Nature Medicine journal. They were able to determine that Alpha-Lipoic-Acid, this antioxidant that naturally occurs in the body, when given in terms of supplementation could limit the kidney from developing those harmful, painful, damaging kidney stones. I think this just shows the power of the human body.†

Tune into the full podcast episode for more details on the benefits of Alpha-Lipoic-Acid.