Keeping The Weight Off After The Keto Diet – Invite Health Podcast, Episode 61 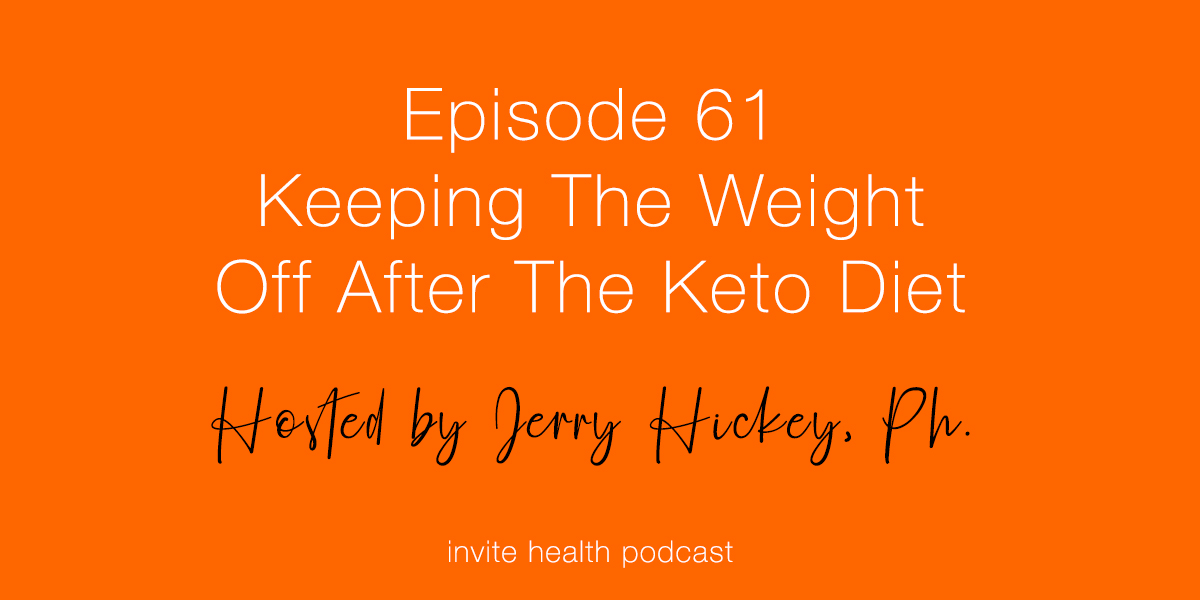 You have successfully lost a good amount of weight on the Keto diet. Now, you’re going back to a more normal diet. So, how do you keep the weight off? There is a supplement that’s been used successfully in a number of human clinical trials. It’s called Phase 2 and it has been proven to keep the lost pounds of fat from returning.

Phase 2 is a bit like Keto-in-a-capsule and it can help you further lose more pounds, as well as prevent the fat from building up again. I know an awful lot about these diets because my pharmacy in midtown Manhattan, Hickey Chemists, was the pharmacy for Doctor Bob Atkins and for most of his patients from the Atkins Center. The Atkins Diet was the original Keto diet. Smartly, Dr. Atkins introduced more healthy carbs, such as blueberries into your diet as you successfully lost weight.

There’s no doubt that most American adults need to lose fat. The latest stats from the CDC show that 40% of American adults are obese; that’s not including almost all the rest who are overweight. Obesity will eventually affect everything from their breathing and sleep apnea, to heart arrhythmias such as atrial fibrillation, memory, kidney health, and knee pain. Additionally, one in ten American adults are severely obese; they will pay with a shortened lifespan if they don’t do something about it. To give you an example, an out of shape, 5’9” person would be obese at 203 pounds, and severely obese at 270 pounds.

How does the Keto Diet work?

The Keto diet is a high fat, high protein, very low carbohydrate diet focusing on including a small amount of healthy carbs. So the diet would be 70 to 80% of your daily calories from fat, 20 to 25% from protein and 5 to 10% from carbohydrates. On the typical Western diet, you get 45 to 60% of your calories from carbs and about 20% from fats. Excluded carbs on the Keto Diet include grains, most fruits, and simpler sugars including what’s in pastries, white bread and soda.

Your body works by converting sugar into energy and carbs are the source of sugars. If you cut back drastically on carbs, your body quickly runs out of its quickest-easiest source of energy which is sugar and it is thought that this takes 3 to 4 days. Then you’ll start to break down protein and fat for energy which makes you lose weight. This is called ketosis and it does work. The ketogenic diet was first developed in the 1920s to help treat epilepsy which it does and it was popular until the 1930s. It became popular again starting in the mid 1990’s.

In 1994, Hollywood producer Jim Abrahams created a foundation, the Charlie Foundation for Ketogenic Therapies, because the diet helped his son who had severe epilepsy. The foundation sponsored a research study, the results of which—announced in 1996—marked the beginning of renewed scientific interest in the diet. There were also appearances on NBC’s Dateline and a 1997 made for TV movie starring Meryl Streep called First Do No Harm. Other benefits from the Keto Diet according to some research is improved brain function in dementia patients, improved blood sugar control in diabetics, and elevating HDL-good cholesterol.

There has never been a fad with more research behind it than the ketogenic diet.

But is it safe for the general public to remain on?

I would say no. First, by restricting your intake of healthy carbs such as vegetables, legumes, and fruits you are getting fewer antioxidants, fewer carotenoids, and fewer polyphenols; these are outstanding protectors for the vision, your memory, your sex organs, and your heart. Second, you’re reducing your intake of B-vitamins, calcium, and iron. You’re also getting way less fiber, which is needed for detoxification, colon health, and to feed your good bacteria.

But it’s more than what you’re not getting; this level of ketosis makes it hard to keep your blood within it’s normal slightly alkaline range. If the blood becomes acidic (as in ketosis) you may go into a coma, your organs shut down and you’re done. To prevent this, the body borrows minerals from your bones to help keep your blood alkaline. So, long term Keto dieting will cause bone loss. All of these minerals released from the bone now have to leave your body and they exit in your urine. Because your urine is slightly more acidic, the sediment from the increased volume of minerals coalesces into a kidney stone and many people who remain on a keto diet are at increased risk of developing a kidney stone.

Also, acid forming diets cause muscle loss and as we age we all can go through a process called sarcoidosis which is already causing muscle loss and this can start as early as age 35; so the diet can increase the rate of muscle loss especially in inactive people. Also, you need healthy carbs to truly reach a good level of physical performance; I could not work out the way I do in the gym if I did not have enough carbs in my diet – you need quick energy when you exercise.

Is it superior to a low fat, high carb diet?

A recent 12-month long study by Christopher et al included 609 overweight adults. They found no difference between the amount of weight lost over the year long period between those on a low carb diet or those on a low fat diet. However, initially according to other data, weight loss may start sooner on the low carb diet. Eventually. you lose as much weight on a low fat diet as you do on a low carb diet. While on the keto diet you’ll want to focus on fiber, vitamins, and minerals.

Now, you’ve worked hard to lose the fat. You’ve successfully lost weight, you’ve met your weight loss goal and now you want to add carbs back into your diet. So let’s talk about what you’ll need to keep the weight off without having to “yo-yo diet”.

Phase 2 helps block sugar absorption so you absorb less sugar from the healthy carbs you are adding back into your diet. After all, broccoli, apples, oranges, blueberries, spinach is important. You’ll also want to consume foods like beans and lentils, peas, and other legumes.

By doing this, you’re mimicking the Keto diet and preventing the weight gain when going back to regular eating and in fact, you may even lose additional weight . You’re absorbing a lot less sugar but your still getting essential nutrients, the potassium to help keep you alkaline to protect your muscles and bones, antioxidants, fiber for your colon, for detoxifying, for regularity and to feed your healthy bacteria and you’re getting less sugar.

You still get the flavor and the goodness, the health benefits, but just not as many calories. Simply take two capsules of Phase 2 with a glass of water before each meal and you’re getting less sugar; about 500 calories less per day to be more exact. It is Clinically proven and allowable health claims for reduced carb absorption in the USA and for fat loss in Canada as it is proven to be safe. There are no stimulants that are bad for your heart or appetite suppressants which can be bad for your memory.