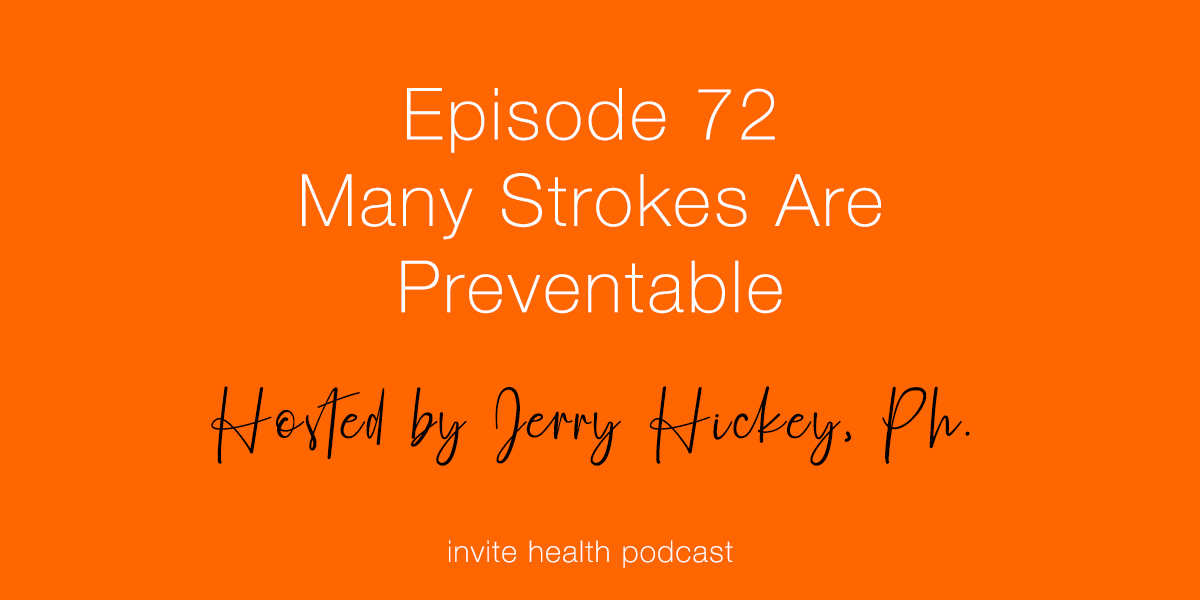 Strokes are quite common. They are a leading cause of loss of mobility and independence. Yet many strokes are preventable by making simple adjustments to your lifestyle and changing some of the foods you eat.

Strokes are a leading cause of long term disability, loss of mobility, loss of independence and even death. A stroke occurs when the blood supply to the brain is reduced or interrupted. When this happens, your brain does not receive enough oxygen or the nutrients it needs to function and your brain cells start to die. Now a TIA – a transient ischemic attack – is really a warning sign that you can have a major stroke in the future. The symptoms pass quickly; frequently, by the time you get to the emergency room, the symptoms may be gone. This is why it is referred to as a mini stroke.

Why Cocoa Is A Superior Heart Health Superfood. Listen Now >>

The most common stroke by far is due to a blockage, called an ischemic stroke. It could be a blood clot or just an embolism that could just be a piece of plaque that broke of the lining of your arteries that went into the brain and blocked the major blood vessels in the brain. Less frequent is a hematocrit stroke. This is when there is bleeding in the brain, which commonly occurs in vegans and vegetarians but also in smokers and people who abuse alcohol.

50% of the factors that increase your risk of a stroke can be controlled by a healthier lifestyle. 80% of recurrent strokes can be prevented with the recurrent steps, such as controlling blood pressure and blood sugar.

First and foremost, you have to work with your doctor on the best methods for you personal health. Generally, the first step is to get your blood tested. You have to treat your diabetes and maintain normal blood sugar, as diabetes is a big risk factor for a stroke. You want to have your cholesterol under control by eating the right foods, exercising regularly and sometimes taking medication. Listen to our Sterols Episode, if you are someone who cannot take a statin drug.

A couple of things not normally looked into but should be:

There are certain drugs that increase the risk of a stroke:

Nutrients and Foods That Support Brain and Heart Health

Minerals commonly found in vegetables and fruits like Potassium are extremely important. Only 2% of Americans get sufficient amount of Potassium in their diet. Magnesium found in fish and fresh vegetables, especially green leafy vegetables is important. Low Magnesium levels has been shown to increase your risk of stroke by about 25%. My recommendation? Magnesium Glycinate can supply a lot of Magnesium in one tablet and it is by far the best absorbed Magnesium you can purchase. A second option is Magnesium Citrate, which still has a great deal of Magnesium and is well absorbed but is not quite as good as Magnesium Glycinate. The difference is that Magnesium Citrate is also a stool softener and will work as a laxative. Magnesium Glycinate will not have this effect. Folate or Folic Acid is found in plants but it is hard to absorb. Oddly, a vegetarian eating plants all day long could still be low in folate. Plus, some people cannot convert folate to its active form and a lot of multivitamins out there use that synthetic, inactive form (folic acid). You want to use Methyltetrahydrofolate, which is already the active form of Folate.†

Cocoa gets processed into chocolate through a process called dutching that adds milk fat and sugar that creates the chocolate we all love to snack on. Unfortunately, when this process occurs, a lot of the beneficially ingredients for the heart and brain in cocoa gets damaged, especially flavonols. Cocoa in its original form has been shown to be great for circulation, the heart and the brain. Cocoa found in supermarkets can be tainted with sprays and a heavy metal called cadmium that has been connected to breast cancer. Cocoa as a supplement has to be checked for bacteria, heavy metals and things of that nature. Invite Health takes that steps further by ensuring our ingredients are not sprayed by chemicals, allowing us to offer a non-GMO cocoa supplement.†