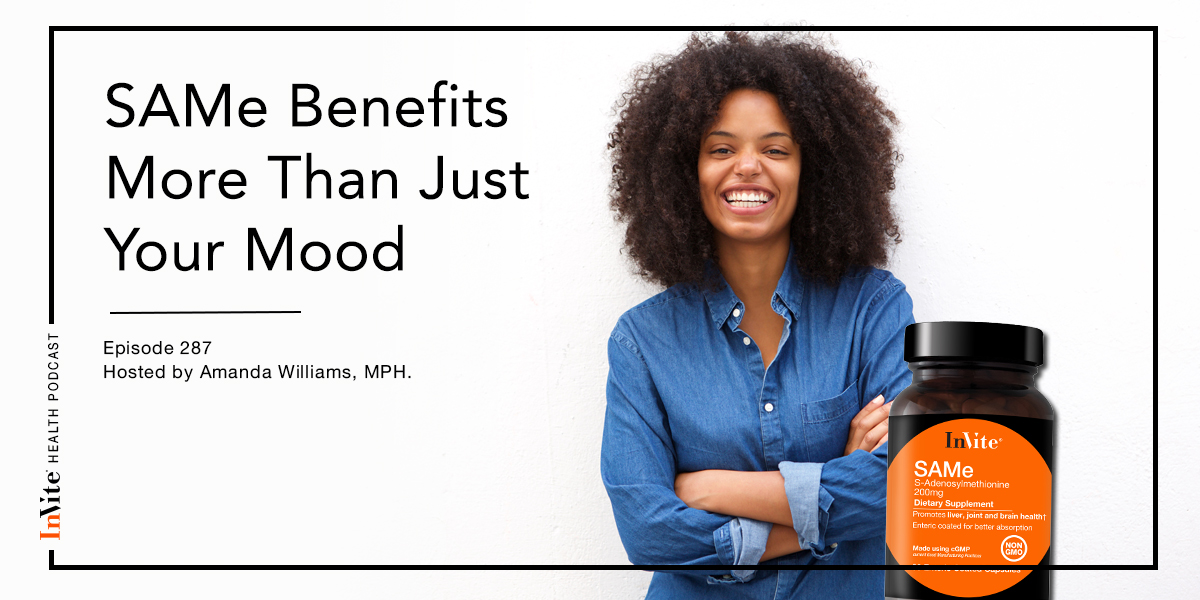 What in the world is SAMe? This is a question that comes up often when people talk about taking different supplements, especially in relation to mood. I want to tell you all about SAMe and what it is actually doing in the body. If you are just thinking of SAMe to try to promote a healthier state of mind, certainly that’s a great thing, but I also want you to know more about what SAMe can actually do for your overall health.

SAMe was first discovered in 1952. It’s an endogenous (naturally occurring) intracellular amino acid metabolite and enzyme cosubstrate involved in multiple crucial biochemical pathways, including the biosynthesis of neurotransmitters, which is why it can be beneficial for mood, but also for hormones. We can assess its concentrations in the blood, as well as in the cerebral spinal fluid (CSF). SAMe is something that has been in the human body since the beginning of time, but yet it was only discovered back in 1952. SAMe stands for S-adenosyl-L-methionine.†

There have been numerous human clinical trials utilizing SAMe in terms of supplementation for clinical depression. The Journal of Clinical Psychiatry, back in 2009, published their findings saying that there is evidence that supports the use of this supplement for the treatment of major depressive disorder. There are so many different antidepressant prescription medications that are available, but many people don’t respond well to them. People get put on one antidepressant, maybe they feel better for a few months and the next thing they’re back to their low mood. Researchers have looked at SAMe, this endogenously-occurring substance, and said that if someone is low in SAMe and we bring that level back up to where it should be, perhaps this can help to stabilize their mood.†

Learn more about the relationship between SAMe and mood by listening to the full podcast episode.

Researchers noted that if SAMe was dealing with other pathways, it certainly goes beyond just neurotransmitters. We also know that it’s affecting hormones and we know that it can affect different methylation pathways. Its involvement in methylation is probably one of its most important processes because it acts as a methyl donor to support a multitude of different chemical reactions.†

We have these different, very important biochemical processes that occur and rely on methylation, including things such as the synthesis of our nucleic acids for DNA and RNA, phospholipids that help to protect our cellular membranes and mineral metabolism. We’ve even been able to recognize the role that it plays when it comes to things like Alzheimer’s disease and inflammatory conditions. There are multiple studies out there looking at this supplement for osteoarthritis patients. Some of these studies in people have compared oral SAMe supplementation with NSAIDs, including acetaminophen and ibuprofen. Researchers have found that people actually had similar pain relief utilizing SAMe compared to the NSAIDs, but didn’t have any of those side effects. This is really, really important.†

Then we can look at the liver. We know that non-alcoholic fatty liver disease is a problem throughout the world that is primarily brought on by diet. SAMe, when we think about that methylation process in relation to detoxification pathways, plays a key role in this as well.†

Tune into the full podcast episode for more information on the various benefits of SAMe.

What do you think about this supplement? How do you help support healthy hormone levels in your body? Leave us a comment below to join the discussion!