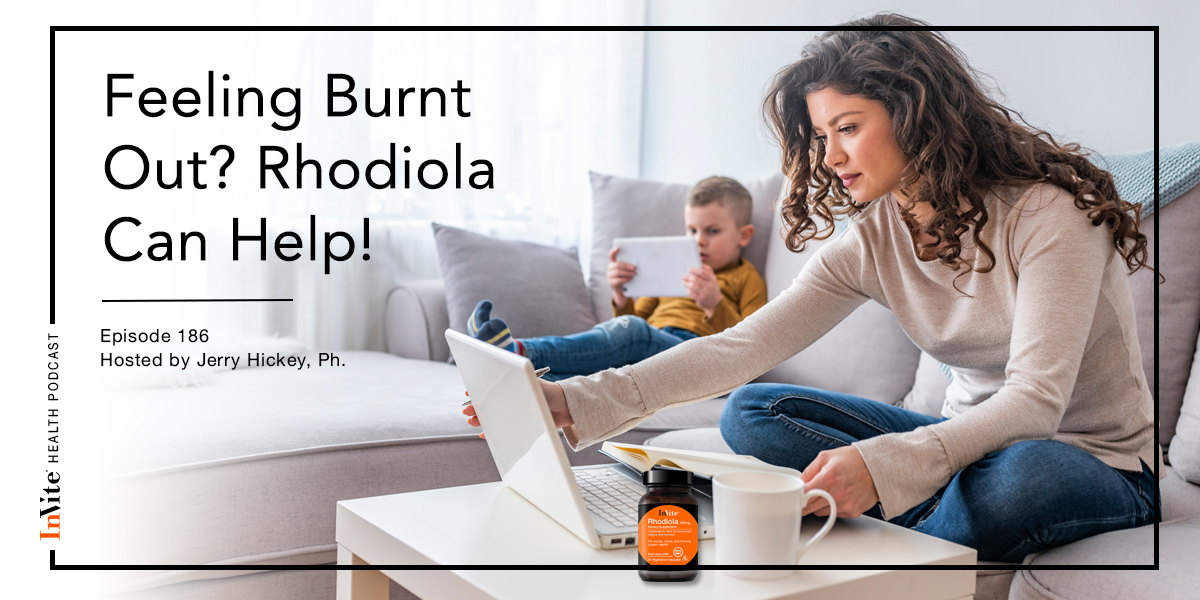 Rhodiola rosea is the biggest selling herb in Norway, and there’s a really good reason for this. It’s actually called Viking Ginseng, and it has helped get Scandinavian people through their long, tough, cold winter for centuries. Vikings used it for energy and endurance and it worked so well they took it along on their lengthy sea voyages. You can track where the Vikings ventured by looking at where rhodiola grows today – Scandinavian countries, Scotland, Ireland, Iceland and finally Canada.

Rhodiola works so well that in Europe they use it for burnout syndrome. It improves stress, mental and physical fatigue and boosts energy. It does all of this safely, according to human clinical trials. Rhodiola has ingredients that are unique to this plant and they are what gives it these beneficial effects. These ingredients are called rosavins and salidrosides and they function as adaptogens. An adaptogen is a natural substance with research supporting its use for improving your energy, reducing feelings of stress, and supporting your immune system.

WHAT IS BURNOUT SYNDROME?

A study done by Drexel University’s College of Nursing and Health Professions and published in the journal Holistic Nursing Practice describes how chronic stress and burnout syndrome are related. The World Health Organization has referred to stress as the health epidemic of the 21st century. Stress, by definition, is a state of  physical, mental, or emotional strain resulting from adverse or very demanding circumstances. Chronic stress is associated with an increased incidence of numerous health conditions that include anxiety, depression, hypertension, and gastrointestinal disorders. Stress-related fatigue is one of the most common symptoms of stress and is a pervasive problem throughout western society. Psychological stress can precipitate long-term exhaustion and diminished interest, which results in burnout syndrome.

When you’re burnt out, you’re fatigued, you don’t care about anything, and you feel like you’re not a part of anything. The symptoms associated with burnout syndrome, according to this article, include depression, anxiety, cardiovascular disease, poor concentration, memory loss, insomnia, and emotional exhaustion, which often manifests in physical symptoms such as headaches and gastrointestinal disorders.

The author of this study also goes on to discuss how rhodiola can assist with burnout syndrome, calling the plant a phytomedicine known for its adaptogenic pharmacological effects on fatigue and mental performance. They also wrote that it has demonstrated clinical efficacy in the treatment of stress-related fatigue and burnout syndrome.

SOME STUDIES ABOUT RHODIOLA

A study done by Uppsala University in Sweden’s Department of Psychology and published in the journal Planta Medica looked at the effects of rhodiola on very stressed out people who became fatigued. This was a phase 3 clinical trial, which means they’re just about to release this supplement to be used clinically and the study will be referred to by physicians, nurses and pharmacists. It was a randomized, double-blind, placebo-controlled study with parallel groups, meaning some patients were given rhodiola and some were given placebo. Both groups saw improvement in psychological symptoms, since such symptoms can be improved with suggestion, but the improvement was far greater for the burnout scale for mental health, fatigue, and attention in people who took the rhodiola.

Additionally, the researchers found that cortisol levels were much more normalized in the rhodiola group. Cortisol is a stress hormone that is expressed by the adrenal glands. While this hormone is needed for getting away from danger and to wake up in the morning, it can have bad impacts on your health when it is being consistently released due to stress. It can melt muscle and bone, raise blood sugar and blood sugar, squeeze blood vessels and make your heart beat faster, amongst other things.

Another study completed by the Medical University of Vienna in Austria and published in the journal Neuropsychiatric Disease and Treatment looked at people with burnout syndrome. The researchers found that “most of the outcome variables demonstrated relevant improvement over time, with considerable changes already being detectable after the first week of rhodiola rosea administration.” In other words, within the first week, stress, mental and physical fatigue, and depression were improving. It was boosting their energy. The researchers worked with 118 people between the ages of 30 and 60 suffering from burnout syndrome. The participants were asked to take 400mg of rhodiola rosea every day for 3 months. The majority of symptoms improved over the course of the study, with improvements measurable as early as the first week. They specifically saw improvements in symptoms such as emotional and physical exhaustion, fatigue, lack of joy, loss of zest for life, and depersonalization. Tune into the full podcast episode to hear more studies about the impacts of rhodiola on burnout syndrome.

I’ve used rhodiola a number of times in my own personal life, especially in the winter. I do a lot of radio and writing and have a lot of deadlines and meetings, and also spend a lot of time creating the supplements here at InVite Health. Sometimes, it all gets to me. We have a 200mg Rhodiola Capsule that has the salidrosides and the rosavins. If I do one capsule at breakfast and one capsule with lunch, I am so much calmer and not stressed out, and it’s just easier for me to focus and get through my day. It really does work, and I always felt very good on it.