The Many Brain Benefits of Alcar and ALA, Part 2 – Invite Health Podcast, Episode 135 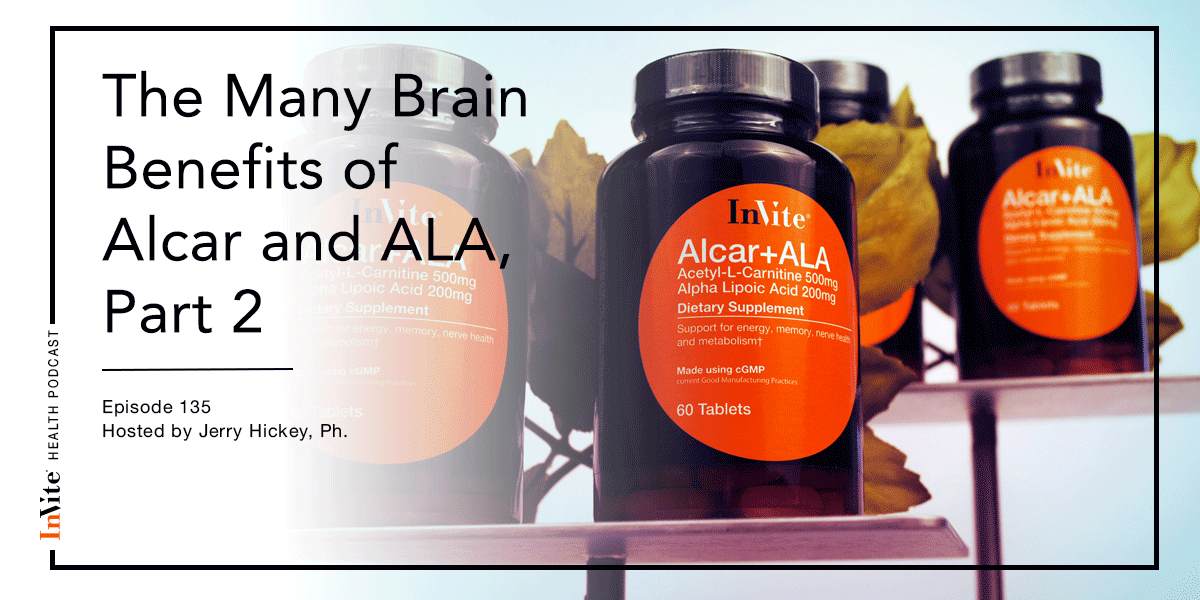 Alcar and ALA are two nutrients that are natural to the human brain that have numerous health benefits. In Part 1, we discussed their benefits for brain energy production. If you missed that episode, click here to listen now! On today’s episode, we will be discussing Alcar and ALA for memory.

Connection Between Memory and Alcar

These nutrients are critical for the function of the parts of the brain that are involved with memory. Alcar and ALA combined are great for recreating memory cells that you are losing on a daily basis, for hardening the wiring between organs and for restoring the health of different parts of the brain involved with memory, cognitive and executive functions. They also help generate connectivity; helping you generate new neuro-pathways and strengthening the connection between these organs.

The Biomedical Research Foundation in Arkansas works with a bunch of research institutions in Italy, as Italy has the biggest brain bank of donated brains postmortem in the world. This research team from Arkansas does neurological research for veterans health, as they are prone to many conditions like PTSD and depression. This study was published in PLOS 1, a group of journals that the American public pays for that are open access and available for the general public to view. This research was studying healthy, older brains, brains with subjective memory loss, and mild cognitive impairment. There is a very powerful and progressive decline in the amount of Alcar in your brain as brain health declines. In other words, the Alzheimer’s brain was very low in Alcar. Now, mild cognitive impairment (which is many steps before Alzheimer’s) also showed a large decrease in this nutrient. Subjective memory loss showed a lower level of Alcar than usual. Healthy, older brains had a good amount of Alcar.

The brain is very complex, so when you are looking for a great brain health supplement, there should be more than one ingredient. Dr. Thomas Shay from The University of Lowell in Massachusetts has done a lot of brain research and he mixed a number of different supplements together and used it in older people who had some brain shrinkage (mild cognitive impairment), in people with early-stage Alzheimer’s and in older people who are just a bit forgetful (which is quite natural). Dr. Shay mixed Alcar with SAMe, NAC, Vitamin E and several B-vitamins (Folate and B-12). Researchers found that within the first three months of using these nutrients, a certain level of memory was restored. The participants even held on to this level of memory re-gain over the course of a year. In fact, in one of his studies, they saw such a clear difference between the patients on placebo vs. the patients on the supplements that they later added them to the patients originally on the placebo and saw the same gains. Over the first three months they regained lost memory and held on to that steadily for the course of that entire study.

How Cocoa Can Support A Healthy Brain and Memory! Learn more now >>

Alcar and ALA easily cross into your brain. But here’s a tip – they get into your brain better if you take them away from food. So I recommend to my clients that they take these nutrients at least an hour before or two hours after meals. Once you eat, you release insulin, which shoves a large, neutral amino acid (L-tryptophan) into the brain so you feel satiated and you get less Alcar into your brain.

Questions for Jerry Hickey about Alcar, ALA or brain health in general? Leave him a comment below to join the discussion!