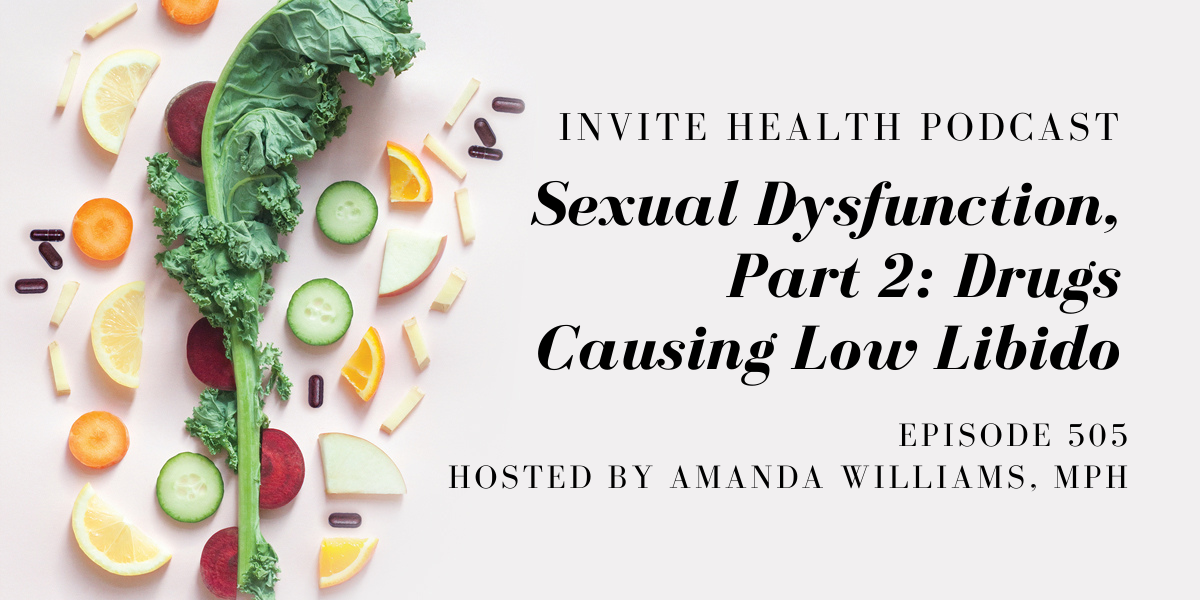 [00:01:25] We know that when it comes to men and erectile dysfunction, this affects millions of men. So just in the United States alone, it’s somewhere around 30 million men have to some degree, erectile dysfunction. So the severity can vary from one male to the next. And of course, we have to look at all of the underlying issues. Cardiovascular disease. Think about diabetes. And it’s the disease state itself. Think about what is actually occurring in those disease states. Think about the vascular assault that occurs when someone has high blood pressure. If you have excess glycation, that’s damaging the nervous system or the blood vessels themselves. So of course, you’re going to have a hard time when it comes to proper blood flow to achieve an erection, say, for example, in a male, if we have damaged vessels, if we have a damaged nervous system that’s brought on because of your chronic disease state.† [00:02:28]

[00:02:29] But that’s neither here nor there, because today I really wanted to zero in on the medications. As I said, this will astonish you. The list of medications that have been directly linked to causing issues with sexual dysfunction. So for the most part, many of these medications create a syndrome in a way of just low libido. No interest. So let me start running through some of these. I’m going to point out one specific class of drugs just right off the bat, because I think it’s ironic in many ways that this class of drugs is so well-known and so many people use them and yet we know that one of the most common side effects from this drug is decreased sexual desire or a low libido. And that is your SSRIs that people use because of depression, anxiety. How many people out there are on these themselves or you know someone who is taking Zoloft or Prozac. It… These drugs, we know are one of the most common classes of drugs that creates sexual dysfunction. And when I say you yourself may use them or you may know someone who’s on one, this is pretty common. We know that in one year, over 70 million prescriptions are written for SSRIs. Now you can go back in time. I mean, this has gone up like two-fold in this country, so I don’t know if that’s a statement of our mental health or what. But back in 2008, I think it was roughly around 36 million prescriptions written for antidepressants. Then that went up to over 70 million in 2018 was the last time that they did this comparative study. So that’s a lot of people taking antidepressants. So SSRI, it’s a selective serotonin reuptake inhibitor. In Part 1 of sexual dysfunction, I had mentioned how different neurotransmitters can be implicated in being a causative reason for sexual dysfunction. So if we have a drug class that’s targeting a particular neurotransmitter, serotonin, this can be part and parcel as to why you’re experiencing a side effect. So we look at the Prozacs of the world and we look at the Zolofts of the world and we say, “Oh, goodness. These are a cause of sexual dysfunction in both men and women.”† [00:05:28]

[00:09:09] But let’s talk about other drugs, because, like I said, the list just goes on and on and on. Let’s talk about antihistamines. Someone has seasonal allergies. And they’re running out and getting their diphenhydramine, also known as Benadryl. Maybe you have acid reflux and you’re taking ranitidine or cimetidine for your acid reflux, over the counter. These can cause sexual dysfunction. So, drugs to deal with your sneezing and your itchy, runny eyes can cause sexual dysfunction, low libido. The drugs for your heartburn can cause this. Why do I bring this up? Because we know that there are things that you can be doing in terms of dietary modifications, so you’re not getting acid reflux. We know that there’s things that you can be doing that come from nature to target your seasonal allergies. Things like black seed extract, rosemary extract, nettle root. There are so many other options, and we know that the rosemary extract, the black seed extract, the nettle root do not create issues with sexual dysfunction.† [00:10:29]

[00:11:10] Cholesterol-lowering medications. Yeah. Your statin drugs. So you take someone who has high blood pressure, high cholesterol, they’re on a statin drug, they’re on a combination therapy drug for their high blood pressure and maybe they are also on an SSRI because they’re depressed because of their current health condition. And what are we doing? We are creating an environment of complete sexual dysfunction. These are important things that people need to know.† [00:11:37]

[00:11:38] Did you know that your NSAIDs? Yes, your commonly-used, over-the-counter drugs for your inflammation and your pain, things like ibuprofen, naproxens can create this. Long-term utilization of these medications can set the stage for impacting sexual performance, sexual desire, and these are major problems for so many people. You know, most of the time people think, “Oh, you know, just you have to think about alcohol or you think about, you know, other recreational drugs. And that’s problematic when it comes to sexual performance or sexual desire.” Certainly, we can include those into it, but not the case… Look at all of these prescribed medications, from drugs for mood, anxiety, depression; drugs for high blood pressure; drugs that target cholesterol; drugs that target your acid reflux; over-the-counter NSAIDs, have all been directly linked to being causative to sexual dysfunction.† [00:13:03]

[00:13:04] So I wanted to bring that list to you today because it’s always amazing when I talk to folks who are experiencing issues when it comes to, you know, whether it’s low libido or whatever it is, and then we we start to to analyze, well, you know, let’s walk through a typical day. What medications do you take? What’s your diet like? What’s your exercise like? And it’s amazing how many different components of what they’re doing on a regular basis and the medications that they’re taking can have an impact on how they are feeling when it comes to the topic of sex or performing. And this is critical because, as I always say, as we age, we want to age gracefully. And for many people, part of that process is through maintaining their sexual health. So a lot of moving parts, we’ve got things such as hormones, we’ve got neurotransmitters, we’ve got certainly underlying health conditions, a lot of different factors. But we cannot overlook the direct implications that medications that are prescribed to people for a variety of different health reasons can be implicated in sexual dysfunction.† [00:14:16]

[00:14:17] So that is all that I have for you for today. I want to thank you so much for tuning in to the InViteⓇ Health Podcast and remember, you can find all of our episodes for free wherever you listen to podcasts or by visiting invitehealth.com/podcast. Now, do make sure that you subscribe and you leave us a review. You can follow us on Facebook, Twitter and Instagram @invitehealth, and we will see you next time for another episode of the InViteⓇ Health Podcast.† [00:14:17]