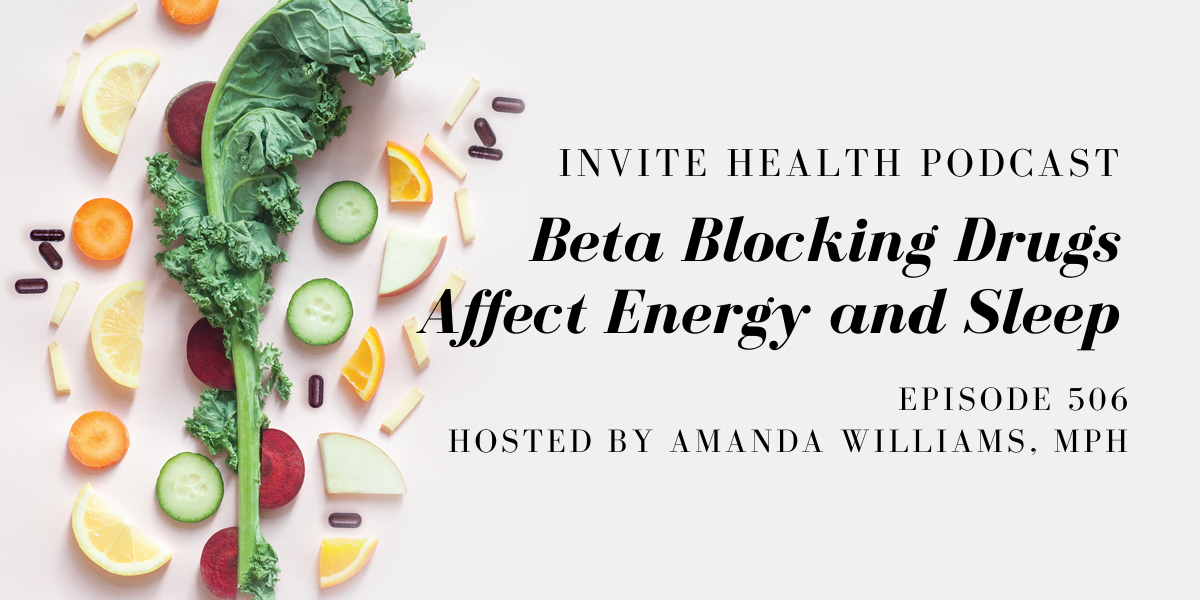 [00:00:40] One of the most commonly prescribed classes of cardiac medications is the beta blocking drugs. I want to talk about the impact of beta blockers when it comes to different nutrients in your system, because if you are one of the millions and millions of Americans who are prescribed a beta blocker, and this can be something like atenolol or propranolol, metroprolol, they usually end in “olol.” Well, not… Usually they do end in “olol.” Beta blocking drugs are known to really reduce the effect of certain catecholamines, such as epinephrine, norepinephrine, which is key because it helps to relax the blood vessels, which can help with proper blood flow throughout the circulatory system. It can also help to improve upon the nerve conduction system of the heart, as well as regulates or slows down the heart rate. And many people are taking beta blockers.† [00:01:47]

[00:01:47] Now there’s a common symptom that goes along with being on a beta blocker, and that’s what I want to talk about today, because it’s a direct correlation to the nutrient depletion that beta blockers are known for. So I’m Amanda Williams, MD, MPH. And it’s, it’s key to understand that there exists something known as drug-induced nutrient depletion. This can happen across many different pharmaceutical classes of drugs, and the nutrients to which they deplete can vary from one class of drugs to the next. So when we’re looking at the beta blockers, we know specifically that beta blockers will deplete our natural stores of coenzyme Q10, as well as melatonin. So this is important on a couple of different fronts because one of the most commonly complained about side effects of being on a beta blocker is that you have absolutely no energy. Beta blockers are just known to make people feel tired, and part of this is that that lowering of the the heart rate and the downregulation of their epinephrine and norepinephrine. So once we’re dealing with that, we’re helping to support the heart for whatever condition you’re contending with, but we’re getting this side effect of fatigue. We know that when people are on beta blockers, there is a great likelihood that fatigue will be a common thing that they will complain about. Oftentimes, people will take their beta blocker, maybe in the morning and then by, you know, noon or the afternoon, they feel incredibly tired.† [00:03:37]

[00:03:38] Part of this is due to the fact that we know that the beta blocking drugs depletes over time the body’s ability to produce coenzyme Q10. We know that coenzyme Q10 is naturally occurring antioxidant in the body that is responsible in part for the generation of energy coming from your cellular mitochondria. So hence, when someone is feeling fatigued or lethargic and perhaps also not getting restful night’s sleep, we have to look at the two nutrients that are directly impacted from those beta blocking drugs, which is going to be CoQ10 as well as melatonin. So generally speaking, anyone who is on a beta blocker should at minimum be utilizing CoQ10 Ubiquinol as part of a daily supplementation routine to offset that negation that occurs with natural production of CoQ10 in the body. So you want to make sure that you’re supplementing with that so we don’t create this significant deficiency so your little cells can still generate energy.† [00:04:45]

[00:04:46] The other thing that you want to pay close attention to is your sleep cycle. Are you starting to see sleep disturbances? Are you finding it difficult to have a full restful night’s sleep? Is it difficult to, you know, maintain sleep, which is when I say full, restful night sleep. Maybe you’re getting up, you know, episodically throughout the night. And of course, we have to look at other reasons why that can be occurring. You know, if there’s an issue going on with, you know, prostate health, for example, in, in men. But this is an area where I’ve talked to so many people who have been on beta blockers for years and years and years to control their high blood pressure or to, you know, help with heart rate. And they’re like, “Oh, I can’t sleep, you know, I just I have just horrible sleep patterns.” And they’re not even aware of the fact that their beta blocker that they’ve been on for all these years is basically taking a hammer to your natural release of melatonin. And so without adequate melatonin, of course, you’re not going to be getting adequate sleep.† [00:05:53]

[00:05:54] So you have to look at the multiple metabolic and physiological ways in which the beta blockers can negatively impact your health. So with CoQ10 deficiency being a very good likelihood and also looking at melatonin becoming deficient, you can now start to see this association between sleep disturbances, and of course, once you’re not getting restful night’s sleep, you’re going to have, you know, reduction in normal energy production and functionality throughout the day. And then, you know, you have no CoQ10 to allow the cells to drive up any additional energy. So it’s multifactorial here. And what’s interesting is that the millions and millions of prescriptions, I think I can just look at one just metoprolol, it’s like the fifth top prescribed medication in the United States and annually close to 75 million prescriptions written. So what that breaks down to in terms of total number of individual people who are taking that were over 15 million. And that’s just one drug. You know, we have a whole class of drugs, but you have just one drug, metoprolol, which is going to create the situation. And when I say it is going to, we know that drug-induced nutrient depletion is a real deal thing. It’s not a, oh, it might happen. It’s a when it’s going to happen. Does that happen within the first month of you being on a medication? Is it delayed over time?† [00:07:37]

[00:07:38] But you know, the things that you can certainly pay attention to is number one, you can go have your CoQ10 level tested and you can see that that level is low and then you can make sure that you are supplementing to get yourself to the point where you’re having healthy levels once again. With the melatonin, if you are noticing patterns of sleep disruption, then incorporating melatonin into your routine, you may be taking 3mg of melatonin, and that’s usually a good place to start. Melatonin dosing is going to vary from one person to the next, so 3mg may be too much for one person, may be not enough for someone else. So, you know, 3mg is generally a good place for a starting range when it comes to melatonin supplementation. But you have to be cognizant of these things because your doctor will not tell you. It’s just not going to be on the side of the medication bottle saying, “Oh, you know, you know, beware, beware. You may end up with fatigue and, you know, disrupted sleep, and it’s because you’re not going to have enough CoQ10 or enough melatonin.” You are not going to get these warnings. It’s not going to be in the little pamphlet that you get from the pharmacist. This is something that is rarely ever discussed, but yet so wide known and physicians, unfortunately, who are the ones who are writing out the prescription, are usually not aware of the actual nutrients that can get depleted. And so they’ll have a patient who presents who says, “Oh, I’m on, you know, atenolol and I just, I have no energy,” and they’re more concerned about, “Oh, your blood pressure’s good, so that’s all I care about.” But the the person who’s on that medication is dealing with all of these problems in terms of chronic, you know, fatigue, which can then start to impact mood. And we can see these things. We can see how insomnia and depression and this will then start to impact other areas and we can start to see problems in blood glucose fluctuations. So by just depleting coQ10 and melatonin, we’re now impacting other systems. And we’re not going to have that aging gracefully component one, we have low coenzyme Q10, so all of these are certainly problematic.† [00:10:08]

[00:10:09] And understanding that melatonin is far beyond that of just the support when it comes to sleep, we understand that melatonin is doing many different things in our body to maintain our health. Remember, when we think about the endocrine system and you think about different hormones, we have to be cognizant of the fact that these nutrients or these hormones have many different utilizations. So even when we think about cognitive function, cognitive ability. Certainly, melatonin has been looked at as having these neuroprotective properties. So it’s not just about, “Oh, let’s, you know, take melatonin to help us sleep.” We know that there are neuroprotective properties to it. We certainly can see how it can enhance our overall immune defenses, which is really very important as well. So when it comes to our memory, when it comes to attention, focus, all of these matter and all of these can be impacted just because you are on a medication that is meant to help whatever heart condition you’re on. But because you are now depleting out your coQ10 and your melatonin, you can see how you can have that spiraling effect of many other systems becoming implicated into that.† [00:11:30]

[00:11:31] So the point that I’m making is, if you are on a beta blocker… Remember, those are the drugs that end in “olol.” So whether it’s propranolol, atenolol, and of course, I’m giving you the generic names. But if you are on one of these medications or if you know someone and mind you, the beta blockers are usually the more common drugs that are prescribed in that setting of heart disease. Also, the ACE inhibitors, and I’ll do another podcast where I zero in on ACE inhibitors and the nutrients that you have to watch out for in terms of depletion when being on an ACE inhibitor. Then I’ll also do one on statin drugs because we know that when it comes down to ACE inhibitors, beta blockers, statin drugs, these are commonly prescribed medications that millions of Americans are on. And if you are not aware of the nutrients that are depleted, you will pay the price in the end with systemic involvement of many other systems. And this is what we are trying to avoid. So if you’re on a beta blocker, you know someone on a beta blocker, make sure that they are taking their coQ10 and to really monitor their sleep cycle. And if they find that they’re struggling with that, then the addition of melatonin certainly would be advantageous at that point in time.† [00:12:48]

[00:12:49] So that is all that I have for you for today. I want to thank you so much for tuning in to the InViteⓇ Health podcast. Remember, you can find all of our episodes for free wherever you listen to podcasts or by visiting invitehealth.com/podcast. Do make sure that you subscribe and you leave us a review. You can follow us on Facebook, Twitter and Instagram. And we will see you next time for another episode of the InViteⓇ Health Podcast.† [00:12:49]