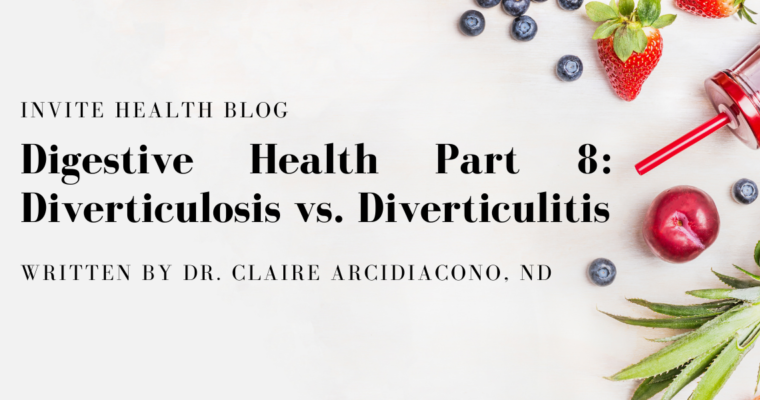 Dr. Claire Arcidiacono, ND dives into the differences between Diverticulosis and Diverticulitis, the causes and best supplements to take. 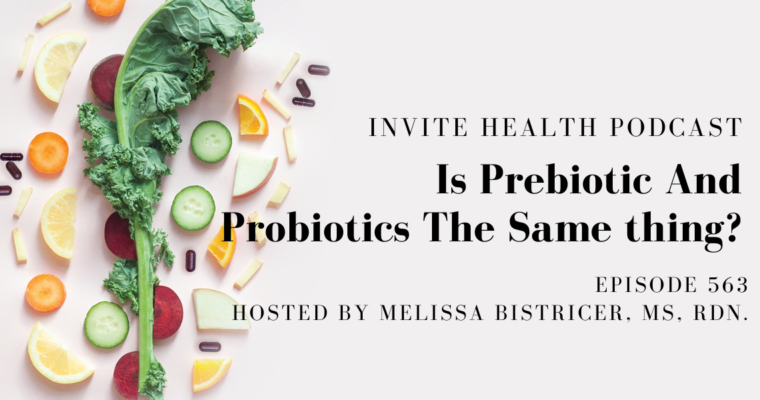 Ever wonder what the difference between prebiotic and probiotics are? Well today you can learn the simple difference with Melissa Bistricer, MS, RDN. 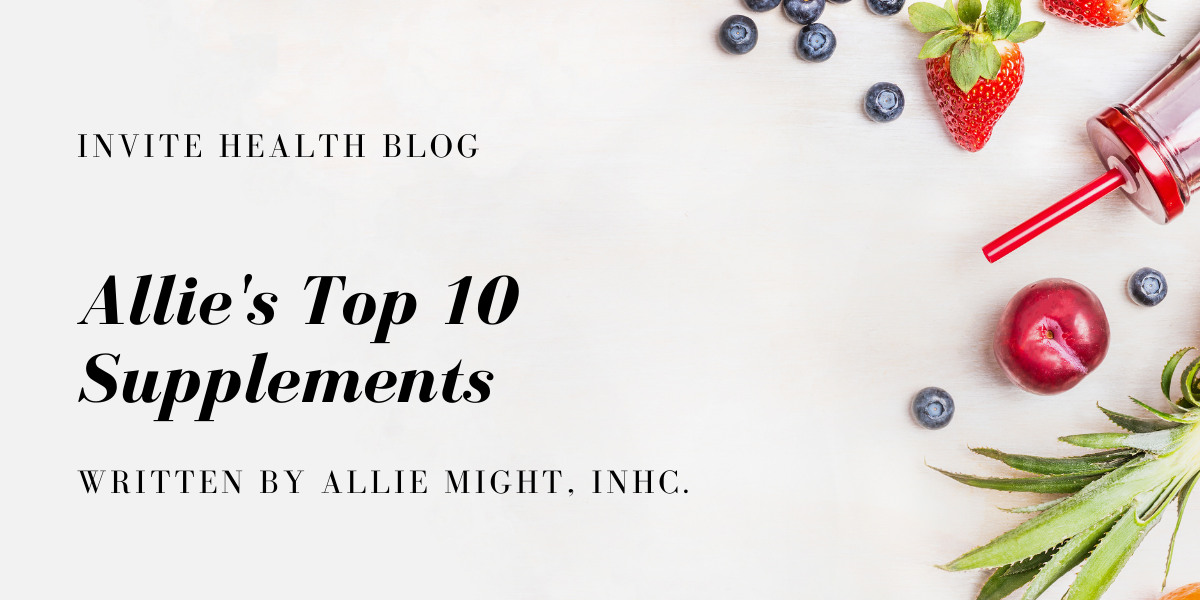 For further questions or concerns email me at amight@invitehealth.com

I wanted to take a moment to share with you what I feel are the ten supplements most people should be taking.†

A multivitamin is the essential baseline to start your personal vitamin regimen. Once you’ve established the right multi for your personal needs, you add in any other supplements for your own health concerns and goals.†

Most have heard of probiotics as healthy bacteria and as important to re-balance our gut after taking an antibiotic. However, did you also know helpful probiotics are for digestion, immune function and weight loss?†

Collagen is needed for all of our connective tissues, not just hair, skin and nails. It can help your brain, muscles, tendons, ligaments, joints and bones.†

Omegas are a true powerhouse! They are important not only for our heart and brain, but also for our eyes, veins and skin. Omegas can aid in digestion, support healthy bowel function and hydrate from the inside out. Omegas can also ease inflammation.†

NAC is a precursor to glutathione, which means our bodies use NAC to make glutathione, which is essential for anti-aging. NAC is most commonly used for our respiratory system to open up the lungs for easier breathing and to aid in liver and kidney detoxification.†

Grape Seed Extract is a great antioxidant that can help aid in circulation. This nutrient can also be beneficial for maintaining healthy blood pressure levels, healthy eyes and even targets inflammation.†

Resveratrol is something we’ve all heard of…it’s what makes a glass of red wine “good for you”. It’s great for anti-aging, as well as our brain, heart and intestinal health. Resveratrol can help our cells fend off free radical damage, which can make us more susceptible to developing illnesses and diseases.†

Green tea is a great all-around beneficial antioxidant. Not only is it good for maintaining healthy weight but can also aid in weight loss by helping to promote fat burning in our bodies. Green tea can also act as an immunity booster and can support healthy cell division.†

Everyone knows how important calcium is for our bones. It helps to keep them strong and healthy. It can help maintain bone density and is essential for proper bone aging. Calcium is best used along with such vitamins and minerals like magnesium, Vitamin D, Vitamin K and sometimes strontium.†

Vitamin D3 that is a lipid soluble compound that plays a significant role in calcium homeostasis and bone metabolism. Vitamin D naturally comes from sunlight but with time people are getting less sunlight spending more time indoors. As mentioned above calcium and vitamin D can play a role together therefore it is important to include vitamin D into your daily regimen as well. †

For further questions or concerns related my recommended supplements, email me at amight@invitehealth.com. 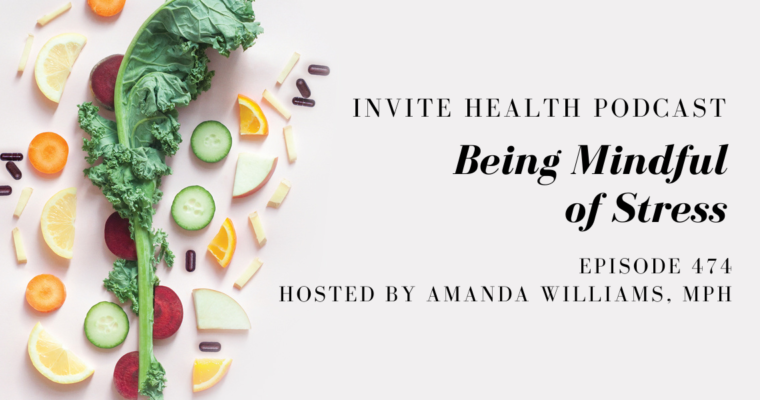 Everyone deals with stressors on some level, but if you deal with chronic stress, this can have serious impacts on your overall health. This is why it is so important to take the necessary steps to help your body adapt to these stressors. 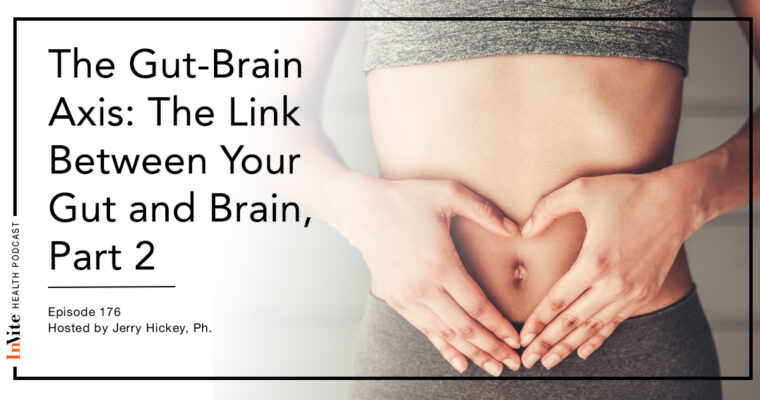 The Gut-Brain Axis: The Link Between Your Gut and Brain, Part 2 – Invite Health Podcast, Episode 176

In Part 1, we discussed how the gut impacted your memory. Now, in Part 2, let’s discuss the link between your gut and your mood. Here’s what you need to know. 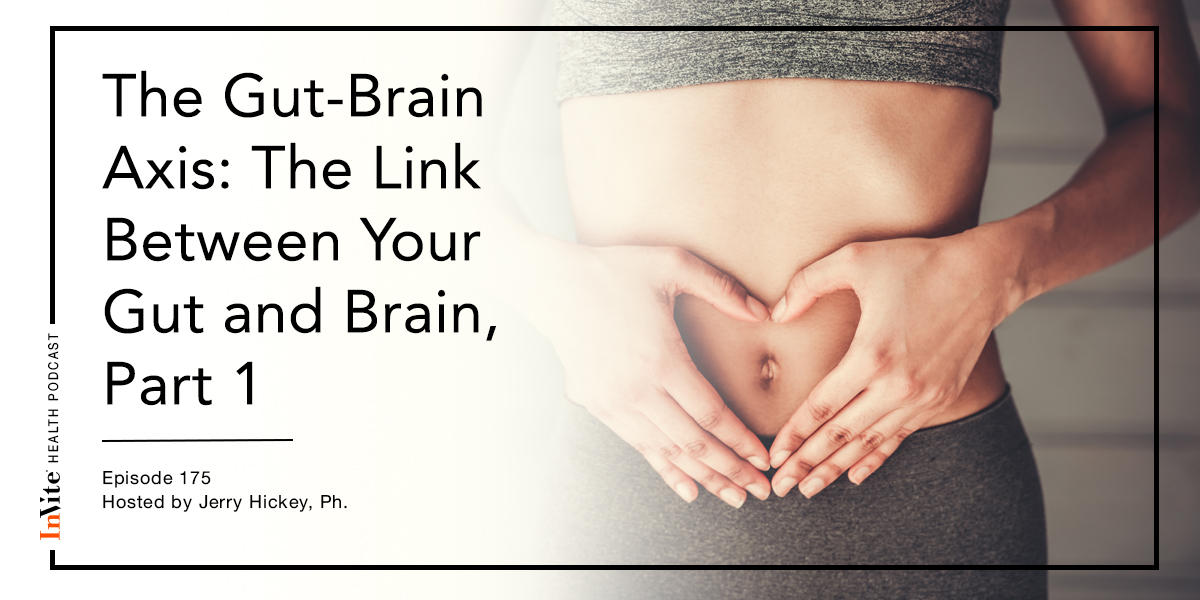 The Gut-Brain Axis: The Link Between Your Gut and Brain, Part 1 – Invite Health Podcast, Episode 175

The interaction between your gut and your brain is really important. It’s called the gut-brain axis. Let’s start with an interview from March 2017 that aired on CBS This Morning. In this segment, they interviewed Dr. Rudy Tanzi, who is a PhD, Director of the Alzheimer’s Genome Project at Harvard Medical School and a researcher at Massachusetts General Hospital. In this interview, he discussed various steps you can take to reduce your risk of developing Alzheimer’s disease. The moderator of the interview asked Dr. Tanzi, “Aside from choosing the right parents, what can somebody do to prevent Alzheimer’s or try to help prevent Alzheimer’s?”

“The four big categories are diet, exercise, sleep, and stress reduction,” Dr. Tanzi said. “I wrote about this in my last book Super Genes. There’s 6 chapters, which is more than you wanted to know about how to adapt your diet to minimize inflammation and plaques, meaning Mediterranean diet and probiotics, take care of your gut bacteria.”

“Well, so it turns out there’s what’s called a gut-brain axis,” Dr. Tanzi said. “When the bacteria in your gut are creating chemicals that interact with your brain, that do everything from determine your mood to control how much inflammation there is in your brain.”

“And even obesity, right?” the moderator said. “It’s amazing what we’re learning about these trillions of bacteria that people were saying, ‘Oh, wash them out… I’m going to get a cleanse. They’re icky! Let’s get them out of us!’ It turns out, of course, millions of years of evolution — they’re there for a reason.”

“And you want to take care of them,” Dr. Tanzi said. “They’re there to help you. A Mediterranean diet, more fiber, more fruit, what are called prebiotics, probiotics…” You can read the remainder of this interview with Dr. Tanzi here.

THE IMPORTANCE OF PROBIOTICS

Probiotic bacteria is very important as supplements. I always discuss rejuvenating your healthy bacteria through sleep, water, some exercise, and avoiding bad things like excessive alcohol. A good diet is extremely important as well. The fibers in your diet are the food for the bacteria in your gut. Fermented foods like kefir and good forms of yogurt like Greek yogurt and a probiotic supplement are also important for gut health.†

Our gut is often referred to as our second brain. Our brain has a huge number of nerve cells and our gut does also. There are nerves directly connecting our gut to our brain. Expressions like “a gut feeling” or “butterflies in my stomach” refer to this connection going from the brain to the digestive tract. This connection also goes in the other direction. There is also communication that comes from the gut and affects the brain. A lot of this has to do with the trillions of bacteria, literally pounds of them, that reside in our digestive tract.†

The famous and highly entertaining astrophysicist Neil deGrasse Tyson wrote in his book Astrophysics for People in a Hurry that “more bacteria live and work in one centimeter of my colon than the number of people who have ever existed in the world. That kind of information makes you think twice about who – or what – is actually in charge.” It just makes sense and science proves that intestinal bacteria must interact in ways that impact many facets of our health, including our brain health and our brain function.†

Bacteria in our colon thrive on the fibers in healthy foods such as fruits, vegetables, whole grains, and pulses such as beans and lentils. They ferment the fiber and release short chain fatty acids (SCFAs) including pyruvate, lactate, and butyrate. This actually helps control our appetite. When the bacteria feed on the fiber and release pyruvate, the brain senses this and uses it to gauge the amount of food (which is the same as the amount of energy) you have consumed. When the brain measures enough pyruvate, it decides you have eaten enough and shuts down your appetite. This appeared in the American Journal of Clinical Nutrition in July 2016. Lactate is used to help eliminate problematic bacteria.†

Butyrate only lasts for a flash, like lighting a match, so a good way to keep it around long term is by maintaining a healthy diet and having enough good bacteria in your intestines. Butyrate gives the body energy for digestion, as well as for the absorption of key nutrients such as calcium and magnesium. It also gives the intestinal cells like the enterocytes and the colonocytes the energy to control the intestinal immune system. This is important because about 75% of our immune cells come into contact with our digestive tract every day. The butyrate that’s made by the healthy bacteria when you eat good foods also gives you energy for healing the intestines, and also helps to normalize colon cells. This helps reduce inflammation, as well as the risk of colon cancer, according to numerous studies.†

But what does butyrate do for the brain? Butyrate helps create the blood brain barrier. This is additional insulation in the blood vessels in the brain. The same circulation that is in your toes and by your heart is the same circulation that enters your brain, so the blood brain barrier prevents bad things from exiting the circulatory system into the brain. Research is finding that having the healthier versions of bacteria in our gut offers some protection against dementia including Alzheimer’s disease and against depression. It can also help you cope with stress and anxiety, as well as Parkinson’s disease. The presence of these bacteria are also linked to overall brain wellness and can possibly help with migraines.†

Let’s look at the psychological, mood and memory benefits of having these bacteria in your gut. A study done by the University of Verona in Italy in conjunction with their local hospital looked at how a daily dose of a multistrain probiotic supplement impacts mood in people with depression. The researchers found that it significantly improves mood, reduces depressive symptoms and anger, and improves sleep quality and fatigue.†

A randomized controlled human clinical trial conducted in Japan looked at how the bacteria in the gut impact memory. They worked with a strain of bacteria called bifidobacterium breve and a group of 80 normal-weight people aged 50 to 79 with mild cognitive impairment. Half of the subjects received the bacteria twice a day for 4 months, while the other half received placebo at the same frequency. The researchers found that scores on cognitive function tests absolutely improved for subjects on the probiotic. The findings show that it improved immediate memory, visuospatial construction, and delayed memory.†

A report published in the journal Frontiers in Aging Neuroscience showed for the first time that probiotic supplements can help people with dementia. The researchers gave a daily dose of a probiotic supplement containing lactobacillus and bifidobacterium to people with Alzheimer’s disease aged 60 to 95 for a period of 3 months. This was enough time to yield a moderate but significant improvement in Alzheimer’s disease patients’ memories on a Many Mental State exam. That exam is a standardized test to measure the severity of memory impairment, so any improvement is significant.†

More about the science that proves gut health is important for boosting mood will be covered in tomorrow’s podcast episode. Stay tuned!