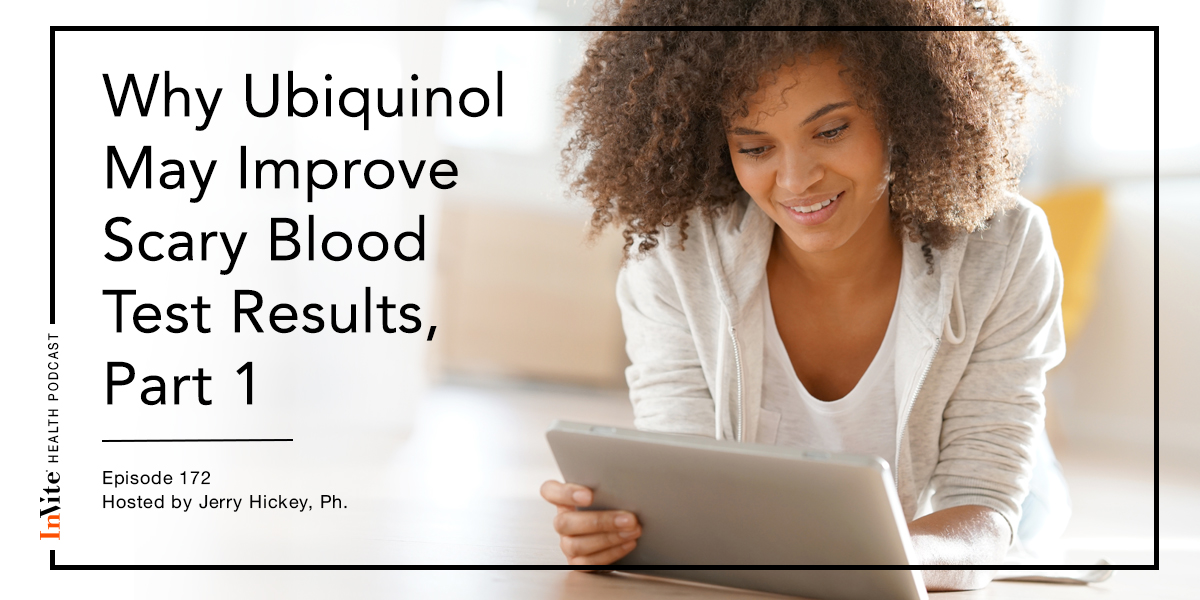 There are blood tests that you can have added to your yearly physical that may give you rather scary results about your heart health. The good news is there’s a supplement called Ubiquinol that may set them right.

Ubiquinol is a molecule that you make when you’re young and healthy that helps you convert oxygen and calories into energy. The highest concentration of Ubiquinol is in your heart, but it’s very dominant for muscle function. You’ve heard about a very commonly known supplement called CoEnzyme Q10 or CoQ10. People take CoenzymeQ10 for energy, heart and kidney health, and improvements in physical performance. The classic CoQ10 is an inactive form that’s really called Ubiquinone. Ubiquinol is its active form. CoQ10 actually has to be turned into Ubiquinol in your body for it to have any effect. The problem is a lot of people don’t do well converting CoQ10 to Ubiquinol.

About 20 years ago, you couldn’t get Ubiquinol. You’d have to take enough Ubiquinone and hope that it would be converted to Ubiquinol to provide some benefit. Now, you can get Ubiquinol from a very good manufacturer called Kaneka™. It’s a Japanese company and they make Ubiquinol through a natural fermentation process. It’s an antioxidant form of CoQ10 and is the body-ready bioidentical version of CoQ10 (the one that protects the heart and gives you energy and helps with your muscles). Diabetics in particular struggle with converting CoQ10 into Ubiquinol, so they’re one group that would get a lot of benefit out of Ubiquinol.

WHAT CAN UBIQUINOL DO?

A study of one hundred German Olympic athletes trying to qualify for the Olympic games demonstrated the effects of Ubiquinol on athletes. Over the training sessions, some athletes were put on placebo and some were put on Ubiquinol. The athletes on Ubiquinol improved their finishing times. This is significant especially for these athletes because improving your finishing time just a little bit is the difference between getting a medal and not getting one at all.

There was a very interesting study out of Australia that worked with physically fit middle age men who were put on statin drugs. Statins tend to inhibit energy production a little bit. These men were going to the gym and researchers were doing all kinds of metrics on their physical performance. They found that when they put the men on Ubiquinol, their strength, stamina and endurance improved within two weeks. In fact, a lot of drugs reduce your level of Ubiquinol. For instance, certain drugs for diabetes, high blood pressure, high cholesterol and high triglycerides can all have this effect. So if you’re on those drugs and you’re starting to get a little more fatigued or losing your stamina a month or two after starting them, you might want to try some Ubiquinol to offset that.

There are a number of studies that also show that Ubiquinol can help improve fatigue in older patients. Some studies worked with older women, some worked with older men, and some worked with a mixed population. These researchers all found that when they gave these patients ubiquinol, their energy returned and the supplement helped rid them of the mild chronic fatigue associated with aging.

UBIQUINOL AND THE HEART

Some studies out of Linkoping University in Sweden and the Karolinska Institute and other academic research institutions in Finland, Norway and Sweden, found that when you give older people Ubiquinol, you cut way back on a number of heart-related events, like heart attacks, and you improve their survival. Some of the studies show that over a five year period, you cut back on a number of heart attacks and heart-related events by over 50%. In older people, when they gave them Ubiquinol versus placebo, it kept them out of the hospital and gave them greater vitality.

Ubiquinol starts to drop in your body at the age of 40, but only at about 1% per year. By the time you’re 50, you’ve lost about 10% of your Ubiquinol, but in your 50s, the drop starts to accelerate and it really takes off in your 60s.

It makes sense that giving an older person Ubiquinol would be beneficial, as it assists with aging of the heart, metabolism in the heart, and the removal of some stress off the heart.
Researchers found that with age, we build up fibrotic tissue in the heart, we develop fibrosis. An extreme example of that would be heart failure, where someone had a heart attack, part of their heart tissue has died, and the heart hypertrophies. This means it gets bigger and stiffer and, because of that, harder to pump blood. Studies have shown that giving Ubiquinol to people with heart failure really helps protect them. They also have shown that when you give patients with heart disease Ubiquinol, it lowers a chemical released by the immune system called interleukin-6 (IL-6). IL-6 is a cytokine, meaning it is a messenger for the immune system that increases inflammation, something you need when you’re fighting an infection. It is not something you need to be chronically released in your heart. Researchers find that in people with heart failure, chronically elevated IL-6 is a bad sign for longevity and survival. When they give people with heart failure Ubiquinol, it lowers IL-6 in heart failure patients, so it helps prevent a build up of fibrotic tissue in the aging heart.

Let’s look at some of the blood tests you can get to help predict your heart health and longevity. The first one is called hs-CRP. Hs-CRP stands for Highly Sensitive C-Reactive Protein (CRP). CRP is released from the liver when the body is inflamed, so levels can rise dramatically during a severe infection. They can also increase during the active phase of an autoimmune disease like lupus, in people with colitis or Crohn’s disease or in people with cancer. You don’t normally see elevated CRP. Hs-CRP is a much more sensitive test. It detects small increases of CRP in the blood that are connected with inflammation in the heart and in blood vessel walls.

Researchers are now connecting elevated hs-CRP as being at least part of 50 to 75% of all heart attacks in the United States. Fifty percent to 75% of people in the United States that are admitted to a hospital with a heart attack actually have normal or low cholesterol. In fact, many of them are on cholesterol lowering drugs. A common finding among them is inflammation in the heart, which is tested with the hs-CRP test. A normal hs-CRP level is 1 or less. If it’s 2, that means it’s somewhat elevated and there’s persistent inflammation in the heart, so you’re likely going through atherogenesis, which means you’re building up cholesterol waxy plaque in the lining of the blood vessels and narrowing and stiffening the blood vessels in the heart. If your level is over 3, that means not only are you stiffening and clogging the arteries in your heart, but the plaque itself is inflamed and it’s more likely to rupture and trigger a stroke or a heart attack.

A study in the Journal of Biofactors done by the Department of Internal Medicine University Hospital Schleswig-Holstein in Northern Germany and the Institute of Human Nutrition and Food Science at Christian Albrechts University in Kiel, Germany looked at over 1300 people and found that there’s a strong correlation between the form of coenzymeQ10 in your blood and the level of inflammation in the heart. There’s a ratio of inactive CoQ10 to the active form, ubiquinol, found in the body. Normally it would be about 25% inactive CoQ10 to 75% Ubiquinol, and sometimes it’s even better than that. These researchers found that people who had a poor ratio were much more likely to have elevated hs-CRP in their blood. When tested against patients who did not have heart attacks, the heart attack patients exhibited much lower levels of ubiquinol. Researchers then went a step further and gave 150 mg of ubiquinol to 53 otherwise healthy people every day for 14 days. They found that this lowered their hs-CRP.

The second blood test is for NT-proBNP, which is a protein released by cardiomyocytes primarily from the left side of the heart. These are the functional cells of the heart muscle. It is released by the heart when it’s damaged, so with an unhealthy heart, you’d find higher levels of NT-broBNP in the blood.  NT-proBNP can be part of your blood test but is not commonly included. Doctors use this blood test to gauge the level of damage to the heart in patients with heart failure or other heart problems. It is also used to test if the drug therapy they’re giving the patient is working and lowering the level of NT-proBNP. Research is indicating it also reflects the age and youthfulness of your heart muscle. It is continually produced in small quantities by your heart. It is released in larger quantities when the heart senses that it needs to work harder.

More about NT-proBNP and the other blood test to predict heart health will be covered in tomorrow’s podcast episode. Stay tuned!